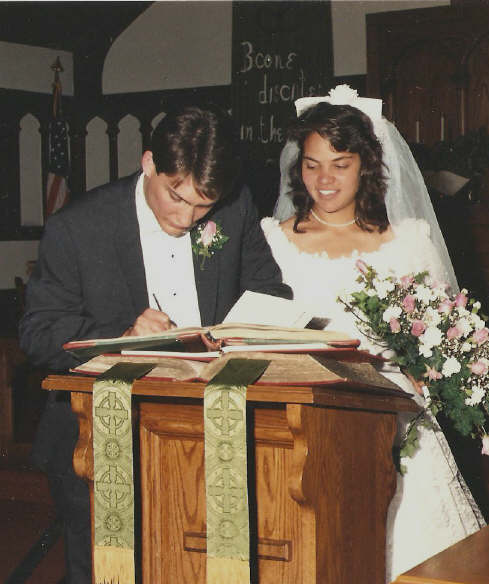 married twenty three years today.  We got it in writing and everything.  Happy Anniversary to Magnum!

This week, I got this e-mail from the mapmyride app on my new Nexus 7 tablet telling me I got a "QOM" badge.  So I'm wondering, "what the heck's a QOM badge??"  Anyone use the mapmy[thing] apps?  Anyway, one of my bike rides overlaps a course, so I got a Queen Of the Mountain badge.

It so happens that it is the beloved Mouse Town section of that route.  I learned that this is just one of the fun things the app does.  I would ride my bicycle anyway, but I rather like being crowned a Queen of Mouse Town.

So yeah, I'm enjoying my new Nexus 7 tablet.  So glad I finally got it for school and tutoring... *ahem*

Speaking of which, fall test prep has begun.  All of my students are nice kids, and I'm not taking on anymore, so that's a good thing.

The work season is ending for Wolfgang.  Recall that he works for a company that packs back-to-school supply kits.  End of work season = free stuff!  Nothing particularly exciting - antiseptic wipes, facial tissues, paper, paper, paper - but "free" is always good.

I mentioned we got Meego all jumpstarted for the new school year.  Chaco and Wolfgang are getting their ducks in a row too.  Chaco finally got his crap somewhat organized after I've been asking him to do so since June.

Happy Anniversary!
Only 23 years ago? Hang in there for that silver one in two years.

Congrats on you QOM designation. That should go well with your Xtreme crossing guard designation. Sounds like your having waaay too much fun with your new toy - the Nexus 7.

Happy anniversary! Don't you look so cute :) It doesn't look like you've aged much since then. Maybe it's from drinking that special water? Stay dry!

You look so happy on the picture; cute and girly, too. The same for Magnum-except boyish. :) Happy Anniversary! Any special celebration?
I tried Map My Run, but figured that I'm not a serious runner and stopped using it. I like it though.
Good luck to the boys in getting prepared and settled.

I researched what to get for the 23rd and got nuthin'. Guess I'll have to stick it out another two years for some silver bullets.

Happy anniversary to you and Magnum! Wishing you many more happy years together!

Congratulations you two! I know you celebrated at someone else's wedding, but I hope you got to spend some time for yourselves!
I use Map My Run all the time, but I've never been named Queen of anything. hmmph.
School is quickly approaching. I'm quite excited for you! It can be kinda scary to try something new, but the challenge can be incredibly fun! I think that's why I love my job so much. It's SO different from teaching and everyday is a challenge. Can't wait to hear all about it!

Yes, we were one of the random old couples at the wedding!
I've been using MapMyRun too, but I'm not the queen of anything over there. I'm just trying to cop some free shooz.
I'm getting excited for the start of school too - just gotta get the kids on their way, then it's my turn!