One minute, everything seemed fine,  then everything just went belly up.  There seemed no end to it.  I still don't have any answers.

But for now, anyway, things seem to have calmed down.  Just before the apocalypse, the population stood at eleven citizens.  Currently, it stands at four survivors. 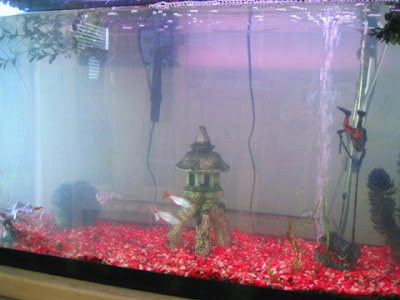 Remember, a coupla weeks ago?  I introduced a few new members to the community?  One turned out to be a terrorist, and justice was swift.  Normalcy was returning, but then, but then...

It started with the guppy bachelors.  One by one, they flailed then dropped.  All three of them.

Next, the swordtail wives.  One sister wife took ill and didn't make it.  The other sister wife followed shortly after.  Husband Zorro died about a day  later.  It was either the apocolarium plague or a bad case of sexual frustration that got him.

The final straw was when I found Hot Lips the plecostomus swimming with the fishes, but not in a good way.  I mean, Hot Lips was a freaking PLECOSTOMUS!   Those things are like the cockroaches of the fish world, likely to survive nuclear fallout!

But not the apocalarium plague.

I'm thinking that I introduced the plague into the community in my attempts to calm The Terrorist.  I put some happy juice in the water.  I'd never used the happy juice before, but found it on my shelf, and served it up to "destress" the fish.

On the bright side, the plants never looked better.
.

I'm having a tad of guilt laughing about the demise of your "beloved" fish.

Happy Juice? I'm a teetotaler-except during the toast at a wedding-but may I ask what kind? :)

Hmmm, quite the cocktail?

Like Anita, I felt bad laughing so much...but you write so well about the animal kingdom! I don't know if I have ever blogged about my brothers and their fish, but now I'm inspired to do so.

Fish can get sexually frustrated? Who knew!

Oh, the horror! How will the others go on??? It's just so AWFUL!

Who knew you could administer a lethal dose of water conditioner?

Since the Lesbians are not likely to produce offspring, it looks like it's up to you to increase the population again.

Water Conditioner... I like the Happy Juice name better.

Ack! I tellya, Zorro was impossible to live with for, like, a day.

Yeah, and what I'm wondering... what is it about The Lesbians that spared them?? Maybe I can earn some hush money from the conservative Christians in my city.

I had to squelch a laugh too. I'm sorry. Hard to believe the Happy Juice took out Hot Lips even! I suppose that's why I try to stay away from that stuff.
Oh well. Hopefully this won't affect your chances of adopting more!

Destress stuff? Hm, never knew they made things like that for fish - we had fish when I was a child and they thrived, spawning masses of babies, most of which got eaten :-(

Luckily, my skills aren't screened when I go to the fish gettin' place.

Yes, that is the usual order of things. Tank mates having the swordtail kids over for snacks...

Sorry about your fish! Maybe the happy juice was expired. Poor little fish,but your description made me laugh.

Wow. That sounds like a B-grade zombie apocalypse movie (Tank of the Dead). That's a lot drama going on in that 'quarium - no wonder the population has dropped dramatically. I love the personalities you describe. Too bad Hot Lips didn't survive the plague.

I feel super guilty for laughing so hard, right now!