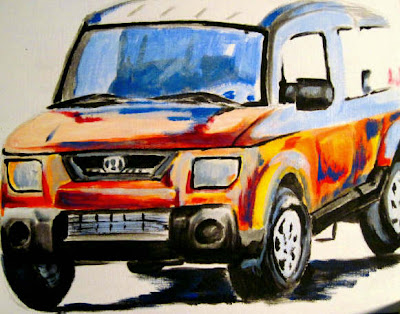 I remember reading an article several years ago, probably in a parenting magazine or some such.  It was about children and new stuff.

The article recommended against having children open birthday gifts with a bunch of other kids around, like at a birthday party.  Save the opening of gifts for a later time, after the little partiers had left.  The reasoning was that, the other kids would most naturally want to play with all of the new stuff too, but the birthday boy or girl wouldn't be ready to share.

"Making" the kid share would only cause more disruption.  There needs to be ample time for the child to make the new thing rightfully his.  A period of "imprinting" before the child is ready to share.

Sounded sensible to  me.  I don't think that's true just for kids either.

This week's Illustration Friday prompt is "New".  I pondered what to illustrate.  My new iPod is a pretty boring subject.  Then I thought of the new Element.

I finally let Wolfgang drive it this week, after much prodding.

Nice to know I did something right with my kids. I used to tell them they could have the whole day to play with their new toy on their own, but after that, they should share with their siblings. It does seem to work well.
I'm impressed you let Wolfgang drive your new toy so soon. I think I owned my Mustang 2 years before I let hubby drive it. To this day, he's the only one allowed - and that is rare.
Love your portrayal of Ellie Mae. She's got lots of character!

Sounds like a good plan, one we never did with our kids. Damn we failed again!!

After reading the article, it made good sense to me. I guess you're just a natural!
I actually hid the key to Ellie Mae for the first two days...

Now at least you have a diagnosis :)

I guess it's natural to want to keep something new all to yourself at least for a little while. And maybe it takes that time to realize that something great doesn't feel as great unless you can show someone else how great it is.

I'm not sure I realized this when parenting young kids, but mine seem to have managed okay. None of them is profoundly selfish or anything.

Nice depiction of the Element - so bold and pretty!

love your story and illustration!