Meego and a couple of his friends were playing a video game in the Man Cave while I was at my estrogen island known as the giga desk.  These friends are twin brothers, about 3 years younger than Meego.  They were about 6 or 7 years old at the time.

Twin1:  I wish we had  a PlayStation2
Twin2:  Maybe we should ask Santa for one
Meego:  Santa's not...
Me:  *COUGH*COUGH*HACK*COUGH*HACK*shutup!*COUGH*HACK*

It was the Christmas season, touchy times.

I think it's safe to assume that Magnum and I are in the minority among families that celebrate Christmas, but have never done the Santa thing.  I don't remember having much of a conversation about it.  It's not like we were still in the dating stages and...

"Do you want to have children someday?"

"Will you tell them there's a Santa Claus?"

It wasn't an issue, we just "didn't go there".  Neither one of us felt comfortable lying to them, even if it made Christmas less "magical". 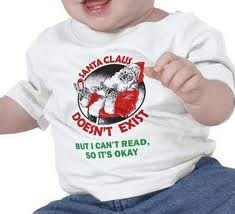 Of course, our kids were never so isolated as to not know about Santa Claus.  He's on TV, he's at the mall, he's on the dang wrapping paper, after all.  We just told them that it's all a sweet Christmas story, for fun.

And we added the rule:  do NOT tell your friends!!

That part hasn't always been easy.  I guess with them thinking of Santa Claus as a story and nothing more, it was difficult for them to get that their friends believed.  Those years I did the daycare?  Serious damage control was necessary at Christmastime.

When I was little, I believed in Santa and got presents from him at Christmas.  I knew the guy at the store or the Christmas party in the cheesy beard and fake boots, whose lap I sat upon, was not Santa.  But the one on TV at Macy's Thanksgiving Day Parade was really him.

I don't remember any traumatic revelation, I just know that at some point, the Santa story became just a story.  It was probably Guano's fault.

And I would never tell someone else's children that Santa doesn't exist, anymore than I would explain to them where babies come from.

Apparently, a couple of teachers don't feel the same.  I came across this story, and I admit it bothered me.  When my kids go off to school, I hope they have mind-expanding lessons and interactions.  But tell a group of 5-year-olds that there's no Santa?

I believed until 3rd grade until another student spilled the beans to me. I recall being mildly disappointed, but quickly realized that nothing that I loved about Christmas had changed.

Our kids believed in Santa. I never knew that one of the harder things I'd have to do as a parent was to confirm for them that the Santa story was really just a story.

I grew up believing in Santa. Found out by friends in the 4th grade. Like Terri, nothing really changed about Christmas because my parents still "played" Santa.
I felt extremely guilty when we first began "lying" to the kids, but as the years went on, it got really fun. It was difficult to tell them the truth, but we wanted them to hear from us and not their friends. After they knew, we still continued to play Santa.
What the teacher did was just awful! What made her ever think that was okay to do? Sheesh. I would have been angry if my children found out that way. (oh yeah... my daughter kinda did.... but that was by accident.) :/

I don't remember ever really believing in Santa; I mean c'mon, his handwriting looks just like Mom's!
I do, however, remember *wanting* to believe and one year almost did (after getting all caught up in the Christmas TV specials). Maybe, just maybe, it's true.... I was almost "there".

Then Mom said matter-of-factly while casually washing dishes, "You know who Santa really is, don't you?"

Yeah I've never been big on the Father Christmas thing either. I just felt the kids would feel well if I lie about that what else am I lying about, and when you have adopted kids it's even more important that they trust you so when they ask questions about their background they know you are being honest.

Our story was that we bought the presents and then Santa looked after and delivered them.

That way we could keep the magic of leaving a carrot for Rudolph and a drink and mince pie for Santa while also making it clear why some kids got more for Christmas than others did.

Ilike the christmas spirit, and i would have some reservation about lying to the spawn about christmas, if i didn't feel like i was lying to her about my competancy as a parent!

Ah yes, touchy subject. But I don't think it's right for any adult to tell a child Santa isn't real, when / if they still believe.

It's nice that you quickly reached that realization!

At least your daughter heard it from you, right? :D

What I want to know is... how did Mom get to Macy's Thanksgiving Day parade?

As long as you're all on the up and up!

Some teacher in my children's kids' class at church told my one of my kids and the whole class that there was no Santa when she was little. My husband didn't mind because he never acknowledged Santa, but I resented someone else making that decision for "me." No big deal though because I had fun confusing them by continuing to say that he was real and that they better put out cookies, feed the reindeer, etc. It pretty much became a running joke over the years between me and my girls. Oh, and I make them take the Santa pic at the mall - another way to torture.. I mean, tease them.

I don't recall when I found out the truth about old St Nick. Learned it from one of my friends in school. I was a bit crestfallen, but somehow I sorta knew it all along. Same thing for my son - we never admited it but he knew. Still, he was a smart kid and knew which side of his bread was buttered on.