We packed Chaco off to college today.  It seemed somewhat less traumatizing than others I know doing the same thing with their little freshmen.  Chaco's campus is about a 15-minute drive from our house.

Wolfgang came along, maybe to get a feel for college life, so I was banished to the small space in the backseat among the bags, boxes, and baskets o' stuff. 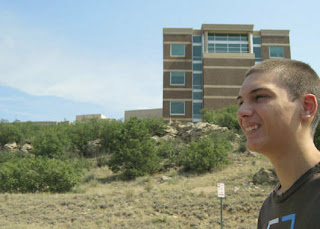 Once we arrived, we needed to hike up to the check-in building... 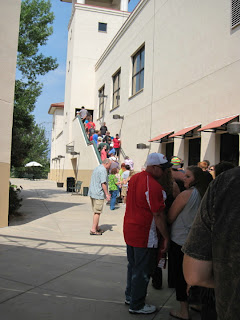 ... where there was the inevitable line.  At a university so known for it's state-of-the-art tech, why were we still having to do the stand-in-line-to-get-a-bunch-of-paperwork bit?  Oh well, we compliantly fell in.

It wasn't all that bad, and once we made it through the check-in, things went relatively quickly.  We were able to pull the car up closer to the dorm to unload.  Thank GOD, because I thought we would have to lug stuff up that hill like Sherpas.

Another nice surprise were volunteer students hanging around waiting to help people carry their crap.  I took all my inner whining that I did while standing in that check-in line back.  I hung back with 3 girls/beasts of burden that seemed to be carrying the most heavy things.  I decided I wouldn't mention to Chaco that his hard drive had been lugged to the dorm by a couple of girls in flip flops.

Two of Chaco's suite mates, including his buddy Andrew, were already getting situated.  The second guy was pleasingly nerdy from a mom point of view.  While I was wondering about when, where, and how they would eat, their main concern was the TV situation and what gaming platforms they had at their disposal.  I don't expect much rowdy partying from this bunch.

So, we've made it passed phase 1, and things seem to be going according to plan.

Geez. I kinda miss him already, too! *sniff*

Only 15 minutes away? That's barely out of the hover mom zone. Still it must be sad to have the big guy out of the house, even if it is just a few miles away. And, to hear you remark about lugging stuff up hills? This is Colorado - I thought everything was uphill.

We did the same yesterday with our Ian! He is going to live in Vancouver and found a room in a house across the street from his college (no dorms at that college, but plenty of people around the good neighbourhood willing to rent a room or five to students.) My husband and Ian had gone the day before with a full vanload of stuff, and did all the lugging required, thank goodness for my back.
I miss him already, too. Phase one, indeed!

It's that time already - the move the kids away to college time. It's nice that he's only 15 minutes away, but I'm sure he's going to be expressing his independence for a while anyway. He'll come home when he's hungry for good food though. Hugs to you, Mom.

I can imagine that it's bittersweet for you. Excited for him and his independence. Sad that things are a little quieter at home.
You might want to wait a few weeks before you break your computer and ask him to do a house call. It may look suspicious....

At least he is close by if he runs out of food and needs his laundry done :-)

We have this to come in September - NEXT MONTH! Wow, that snuck up!

I'm trying to imagine what I'll feel like when my first one goes off to college in two years.