Today is Meego's birthday.  Twelve years already *sniffles*.  We ordered him a gift for his special day, he'll like it  I'm sure.

I placed the online order a week ago yesterday.  I knew it would be close, but since I've had such good luck with mail order lately (NOT!), I was optimistic that it would arrive on time.  Last I checked, it was in Toledo, OH.

It's coming via the U.S. post office, and they've already delivered here today, so that pretty much confirms that he won't be getting his birthday gift on his actual birthday.  Well, someone's got to keep the therapists gainfully employed...

To add salt to the wound.  I got new stuff today (not that I'm disappointed *ahem*):  SHIRTS!

Last week, I got an e-mail from Deviant Art.  I'm not usually a soft sell, but they were offering FREE "Mystery Shirts" to anyone who spent a certain amount in their store.  I ordered a shirt and was promised a second Mystery Shirt!  How fun is that??  Besides, I needed some short sleeves and, as mentioned, I don't like to shop. 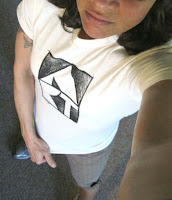 I ordered them Thursday. The shirts arrived today, which is how I know that Meego's thing is NOT arriving today. 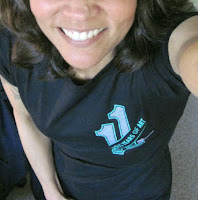 And here's the mystery shirt they sent me.  It's a DA 11th anniversary shirt.  Black background with a nice contrasting green.

I realize that the angle at which I took the photos makes it hard for anyone to really see the design and whatnot, but they're ART shirts okay!  Going for drama.  This isn't the JCPenney catalog!

Now quick!  I have to stash them before Meego gets home!  The therapists don't need that much business.

That is always the way things go for Birthdays around here. We celebrate when we can manage to get the most family members in the same place at the same time. (Not easy.) Gifts may or may not be on time. Kacey's birthday was yesterday. We went shopping and she picked out her own gift. Good enough!

I actually forewarned him that his gift from Magnum and me might not make it in time, so it wasn't too traumatic. I did his "job" for him too (clean the dog kennel), so we're even.

That has totally happened to us before, and the guilt we feel actually ends up allowing them to make out better than they would have if it had arrived on time. I'm sure Meego won't mind his birthday being extended for a day or two longer.
I love the new shirts! Fingers are crossed that Meego's gift arrives soon so you can wear them!

I am sure he will have a great birthday - and another one when his gift arrives! Who can refuse 2 birthdays? :-)

That's why you never count on the postal system in your plans. When it absolutely, positively has to be there late, count on the USPS. We've had the same dilemma before but I really blame myself cause I usually waited too late to make the order. It is kind of a let down to give your kid a picture or IOU of what they are getting. I hope he had a great birthday presents or not.

What a pain in the butt, I hope it arrives very soon.

Love the t-shirts too. I hate shopping in shops but love shopping on-line. :D