Some elders came knocking today.  Mormon elders.  They were between 20 and 23 years old I'd say, these elders. 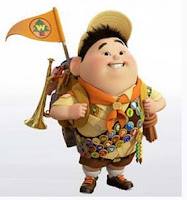 Anyway, I smilingly opened the door and they said, "hello", and then just stood there like they were expecting me to slam the door on them or say something rude.  After this moment of silence, they sort of startled awake and began to talk, trying to remember what to say about their church and all.

They asked if I knew anything about the Mormon church.

"Yes actually", I replied, "We used to live in Utah and most of our friends and neighbors were Mormon".  Not my best friend, but they didn't need to know that.

"OH", their eyes sort of lit up, "Did anyone tell you about the church?"

"Yes actually" (I've done this conversation before with other elders), "We had some elders teach us about the church, did the whole 7 lessons thing, graduated from Mormon school"  Okay, maybe that's not exactly what I said, but that's what I told them.

When we lived in Utah, there was a definite rift between the Mormons and the Non.  We didn't want to be with those who criticize a religion while knowing nothing about it.  Why not do the Mormon school?  We told the boys elders right away that we weren't looking for a church, just interested in learning about theirs.

And no, we didn't become Latter Day Saints, nor will we ever, but at least I have a story for the elders that continue to knock on my door.  They know I won't slam the door in their faces.  They know they don't need to come back.

And they're always so polite.  Notice that they always offer to help out "with housework or yardwork or moving heavy things..."  I've never taken them up on it.  We've got these boy kids around for that stuff.

After they left, I thought to myself, "I should have them dance on the roof, maybe insurance will cover that... hahahahaha...."

Labels: life in the suburbs

Interesting incident xD I usually hear them out first, I think it's rude to slam the door on them. Although I would never become a Mormon, I still respect their beliefs and feel that they have the freedom to follow it. Just so long as they don't try to shove it down my throat xD!

Confession? I usually don't answer the door. Growing up my Dad would talk to them for HOURS ON END...and I choose to notsomuch listen. Oh well ;)

We have one family of Mormons living in our Catholic town of 600 people. Needless to say, they don't fit in very well. We happen to be friends because our kids are good friends, but they aren't people I would choose to hang out with regularly.
I've never had Mormons come to the door, but I often get college kids selling study materials. I always hate to be mean, so I listen for a little while, but I wonder if it's better for them if I just let them know flat out that I'm not interested. Then they can move on to the next family.....

Your dad sounds like my dad. And I've been known to ignorethemtiltheygoaway...

I could probably write a book about being a non-Mormon resident of Utah. It would've been impossible to not mix, but really it was like living in Stepford. I do NOT miss it.

I'm really surprised that you've never had Mormons come to your door! Chaco got me to put a "no solicitors" sign by the front door. I thought it would seem unwelcoming, but he convinced me that it was "nicer" to let them know up front to not waste their time.

I'm a live-and-let-live type too.

You are way too nice. I like to mess with them a little bit (if I even answer the door). One time I turned the tables on one magazine sales guy buy asking if he'd like to buy some Scout Popcorn. But for the most part, I politely tell them that I have no real interest and wish them a good day. If they insist on pushing forward after that response, then I fall back to plan "B".

We have had Mormon visits in the past. My wife had weeks of visits while they tried to convert her. They failed, but most of them were really nice people.

We prefer Jehovah's Witnesses, but they also fail to convert us.

There's a Mormon temple in our neighborhood so we've had our share of knocks on the front door. I try to be polite too, but just usually tell them we're not interested. None of our Mormons have ever offered to help out with chores though! Maybe next time I'll ask if they want to dust the living room while they tell me about their church.