I had trouble getting the computer going this morning.  I had trouble logging in, then once I got logged in, the volume was on full blast and I had trouble turning it down because my mouse was non-functional.

Meego came down for some XBOX action to find it not working.  Turns out the batteries were turned around in his controller.

This has "Chaco" written all over it.  I think I'm back in control, but maybe that's a carefully plotted sense of false security.  The day is still young.


BUT I'm in silver liningness mode nonetheless!   This was a nice week for several reasons.  Spring break for the kids and the weather behaved appropriately. I had to work a little each day, but it was nice to be free of the crossing guard wars for a week.

Magnum took Friday off, and in the afternoon we took a hike in an area we've never been before.  It's a beautiful and relatively unknown spot.  We concluded that it's purposely not well-marked or advertised in order to keep it from being overrun.  There were a few local types around, and that was it.  Magnum found out about it because he does stuff like that. 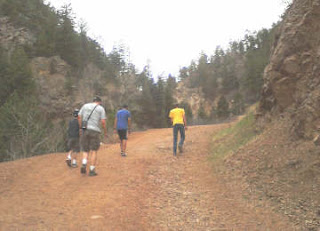 It's a rather steep trail to get to the goods. The trail name was something boring like "trail to the reservoir". I re-christened it "Buns-of-Steel Trail" for obvious reasons. 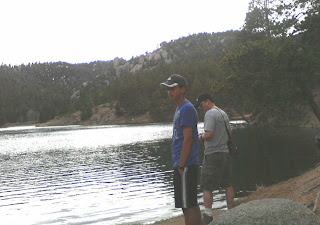 Once there, we basked in the dam beauty of the dam surroundings with some dam ducks.  My damn phone pic doesn't do it dam justice.

Steep trail for sure. You are strong and in good shape, your whole family is, so I can see why you would like this hike. My daughter and her family hike like this.

I'm having a hard time picking out the dam ducks, but I am totally impressed with Chaco's April Fool's joke. :) Glad you had a great spring break!!

Hehehehe What a clever April Fools joke xD! Sadly, I'm a horrible prankster so I won't be doing anything this year because I can't think of anything :s. Anyway, I hope you have a great April Fools (if that's even possible!)

We're preparing for the zombie apocalypse. Your daughter too maybe?

The dam ducks were a bit camera shy. Chaco still needs to fix my keyboard, or maybe I'll just leave it, for the extra challenge.

Happy Holiday to you too! I'm not a very good prankster either.

Heh... it completely escaped my notice that today was April Fool's day. Clearly the inhabitants of this household lack creativity and humor.

I think I detected a hint of Vegas Vacation in your closing paragraph. Good times! Sounds like a dam good time!

"Buns of Steel Trail", and clever weaving of "dam(n)"--hilarious!

That trick with the PC was funny!

The trail to the reservoir looks interesting too - but hey, we know you like a good workout! :-)

Yeah x.x I got pranked real good yesterday by someone though, lol!