Chaco had to build a bridge.

This was for his Practical Science and Engineering class.  Oh the frustration.  The challenge was to make it as light as possible and able to maintain as much weight as possible.  He called me on Friday asking for a ride home because "I have a balsa wood bridge I need to bring home".  So, I picked him up.

It was in pieces - early development stages.  Apparently, this was a team project, yet I never say any "team members" over the weekend.  In fact, the pieces didn't emerge until late Sunday when construction resumed.

There was much gnashing of teeth getting the thing all glued up while maintaining its lightness / frailness.  I told Chaco to take a picture.

"Because that bridge - it's so fragile - what if it breaks on the way to school??  At least with a photo, your teacher will know you finished it"

But my visions of the thing disintegrating before making it back to the classroom persisted.  He needed EVIDENCE damnit!  Even if it just got him partial credit!  It's like women who take pictures of their injuries when their boyfriends or husbands beat them up, right?  There's an analogy there somewhere, I know it.

He took the pic to appease me. 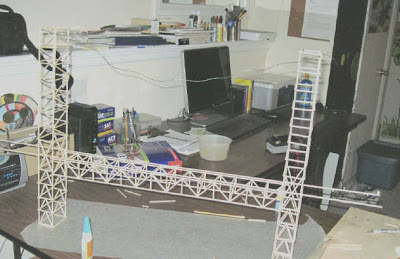 the bridge - hogging my giga desk

The bridge made it to school.  It supported 11 freaking pounds - the weight of our butch cat.

I'm convinced it was the photo that saved it.
.

That is pure scientific awesomeness! Remind me of this in a few years when I'm faced with the same issue here (although the heat might melt the glue right off of that bridge...we'd have to save this project for February or something).

Awesome bridge. Do I sense a little Engineer in the works?

And, for the record, I don't miss those work all weekend, team school projects.

Balsa wood? 11 pounds??? And how come you could never get one of those balsa wood/rubber band/wind-up airplanes to survive more than one afternoon?