a dog walk with half a face and a bear

Today was interesting.  First of all, the crossing guard morning started out better.  I did get a hold of the school building manager who got the flashing lights synched properly.  The only glitch was a large pile of "evidence" left on the walking path to the school by, apparently, a largish herbivore.

I knew it wasn't deer "evidence" or coyote "evidence" or fox "evidence" - the known wild neighbors.  I fathomed that it could be bear "evidence", but here?  A bear?  Nah.  Outstanding crossing guard that I am, I took my shovel to it.  I mean come on, there's moms with strollers that use that path.

Shortly afterwards, I spent about an hour and a half in the dentist's chair on my way to getting a new crown, so I figured the day would be all down hill from there, right?  WRONG

After leaving the dentist, I was just happy to be released from the land of power tools of the mouth, and thought I'd take China the crazy dog for her beauty walk.  Only half of my face was functional because of the novacaine, but I figured I wouldn't need it (the face) for China's beauty walk.

About 15 minutes into it, we were strolling by some apartments when we rounded a corner and were faced with this: 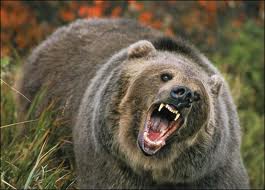 Okay, I didn't have a camera with me, so I got this image from the internet.  But I swear, the beast looked JUST like this... except it was smaller and running in the opposite direction and smaller.

China the oblivious dog and I stopped and decided to turn around and head back from whence we came.  No slaves to the route are we!  Anyway, I guess that cleared up who left me that gift of "evidence" this morning.

I called the D.O.W. and I don't know if they ever tracked the bear down.  I'm guessing not, but it was a bit of harmless excitement for China and me... until tomorrow?

I'm SO glad that half your face didn't get eaten by the big, ferocious, charging bear that was not so big or ferocious or charging. I mean really. What would you do with half a face that didn't work anyway?

Wow. Talk about the Call of the Wild. That's something you don't get to see down here too often. Ok, maybe a lone coyote or lost alligator, but have never had to face a bear on the block. Glad you and China were able to steer clear.

That's one angry bear--glad you didn't encounter that one!

Well you can check that one off your bucket list - I hope!

You're a brave woman and China the crazy dog knows her (or his) limits...thankfully.

I'm having a senior moment. Had to Google D.O.W. Of course, I got the chemical and stock DOWs. So, what does it stand for?