I had a routine mammogram scheduled for last August.  The doctor's office called and said the mammo-machine was on the fritz, and I would need to reschedule.

I got rescheduled for September, and they called again to say that the new mammo-machine was great, but they were still working out a few bugs and I would need to reschedule.

I got rescheduled for October, and they called to check if I'd had any recent vaccinations.  If so, I would need to reschedule. 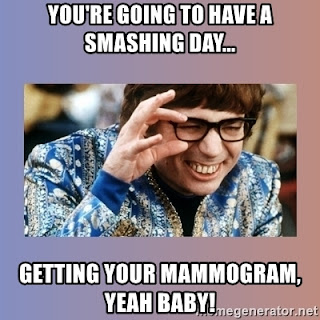 This, a couple of days after I got my flu shot. wouldn't ya know. Okay, fine.

I'm now scheduled for the end of December.  Any bets that the mammo happens?  That new machine's gonna be old by the time I get in there.  Honestly, I'm not disappointed to have these mammograms cancelled.  I've not gotten a COVID booster and was planning to wait until early next year anyway.

But yeah, that flu shot.  I noticed the morning after I got it that my left armpit was gelatinously swollen.  I'd taken the shot in my left arm and hadn't noticed the swelling until I went to shave and was all,

I googled and of course learned that I was dying, but that it could also be a reaction to a vaccine in the form of swollen lymph nodes.  It took almost a week for the swelling to go down.  Anyone had that experience before?  For all I know, it's happened to me before, I just had never noticed.  I take it as evidence that my flu shot - and my lymph nodes - did its job.

Now, onward to a completed mammogram for Christmas.

wow I've never heard of that from the flu shot but good to know. I am glad you are not dying you goofball. How can a place that does mammograms have a bum machine for months? Odd.
I hate mammograms. I do think there should be an easier way to see - oh wait there is, but insurance won't pay. :-)

haven't had the mams squished for years and years...I reckon , no need now- Ancient thing that I am.
According to Dr. Google we should be dead several times by now. Illness and death- no thanks, i just can not get involved...Your reaction sounds deadly for sure.

Peggy, I didn't feel the blob at all, just noticed when I went to shave. For all I know, it's happened with other shots. The office assures me the new mammo machine is "awesome". We'll see.

Linda Sue, I almost feel like skipping the mam squishing at this point. I do it to check it off the dr's list.