I don't know them.  I'm not sure how long they've lived there - one year?  A little longer?  Our neighbors two houses up the street.

They've made nice improvements on their yard, giving their home nice curb appeal.  Laid down some fresh sod, put in tastefully-sized rock gardens including pleasing plants, the driveway is clear of debris...

Since the weather's gotten nice, we're all outside more, including myself.  In fact, two weeks ago, I spent most of my "recreational" time working outside in order to turn that big pile of tangled downed tree limbs into a manageable pile of easy-to-haul tree limbs. 10 yard garbage bags later, some blisters and possible carpal tunnel syndrome, I had this masterpiece: 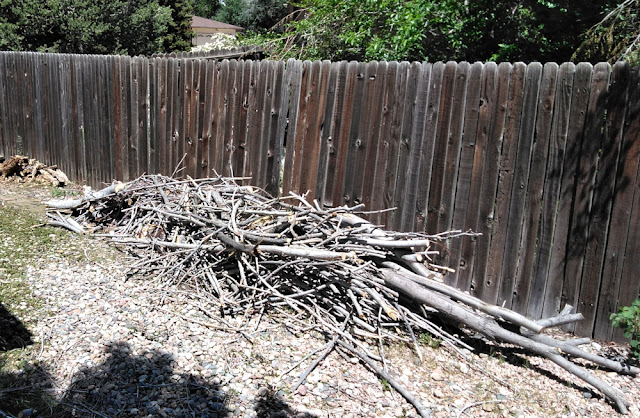 I'm counting it as my major summer accomplishment.  I hired some guys with a big truck to haul it away and don't miss that pile one bit.

So, yes, I was working outside quite a bit that week, enjoying the various sounds of summer:  birds chirping, dogs and kids playing, expletive laced shouting...

Yeah, that last thing.  It happens quite frequently from the nicely landscaped house two doors up the street.  The first time I heard it, I wondered if there was a "domestic situation" in progress.  But since then, I've heard it with such regularity.  Maybe this is their normal??

I'm really wondering, though.  I mean, it's not just an occasional "oh sh*t", or such.  Here's a few example quotes:


etc. on a pretty much daily basis.  This morning, while cleaning our dog restroom facilities:


This coming from their back yard, which I imagine is immaculately landscaped. Always from the same guy, and I never hear any other side of the "conversations".  Is he speaking to his wife? Kids? Work partner(s)?

I've rarely seen them to exchange neighborly pleasantries, and those instances were just in passing while they were focused on working on the front yard landscaping.  However, the week I was hacking away at those tree limbs, the neighbor guy came to our house during an intermission from swearing loudly.

Our mail carrier had erroneously delivered one of our vehicle registration renewals to Expletive Man.  Expletive Man came down and rang the doorbell to give it to me.  I didn't hear the doorbell because I was out back hacking up tree limbs.  I later found the renewal mailing wedged in our door, and footage from the Ring®️ doorbell showed Expletive Man politely bringing the renewal, waiting, and then wedging it in the door.

I thought it was a friendly gesture on his part.  He could've left it for the mail carrier to fix, he could've put it in our mailbox, he could've thrown it away.  He appeared calm and friendly, about mid-30s in shorts, t-shirt and cap.  He didn't seem annoyed in any way.

So, what to think?  He obviously takes pride in his home and property and has an eye for aesthetics.  He nicely takes time to correct an erroneous mail delivery.  He loudly cusses out someone or several people on a regular basis, seemingly not caring who hears.  I'm two houses down, and there are homes all around.  I'm sure I'm not the only neighbor who's heard.

I really wish I would've known and answered the door that day he came with our mail, to try to get a feel for what makes this guy tick.

Ever overheard something violent/questionable/abusive going on at a neighbor's?  Did you act?  Anything come of it?

I wish I had something for you, but I don't. He is outside in the back when you hear him - you could go out and look. Sorry.

You could mail information about narcissism and verbal abuse to whomever he's cussing at. It seems the signs are all there, including the lovely landscaping and his neighborly mail delivery because it's all about outer perceptions. Or maybe a note to him, "You know we can hear you?" Call 911 if you hear violence. Good luck. Sorry you have to deal with it. And yes, I have heard abusive behavior at neighbors' homes. I wish I'd done more than I did.

Well, that certainly is troubling to hear when you're in your own backyard. On the flip side of that, we have a quiet, but creepy family next door. They rarely come outside (unless in a car), and when one of them does, he carries a loaded handgun and wears a body camera. He has told people that he's done background checks on all the neighbors. He has spread lies about me and others to people in the neighborhood. He shot a dog once in the middle of our street because he thought it was attacking him. (It wasn't). His kids never see the light of day unless they are going to school. They family does nothing to improve the house or property. So...which would you rather have? A little FU now and then or a lot of creepy, spying, weirdo dog shooting? lol

Chatty, I'd have to peep over a fence to look, and who knows what wrath that would bring!?

Linda, that "outer perception" thing is what confuses me. He's back there shouting with abandon. He must know we can hear him, right?

Clamco, from now on, when I'm grumbling about neighbors - Expletive Man or otherwise - I think I'll come read this comment to feel better!

Maybe he's clueless, self-justifying, or maybe he figures it's okay to sacrifice his image with the closest neighbors as long as he fools all the rest of them? Don't know, but wish these people didn't exist.

Go to his home and tell him you saw him on your security system and it was so nice of you that I wanted to personally thank you for putting my mail in the door. That way you'd get a "feel" of what makes him tick.
I just hope it's not a child he is speaking to like this. Not that it's great to speak to anyone like that but an adult can leave. This breaks a kid in a lot of ways.
Or even better I hope he doesn't have children.

Peggy, I might try your suggestion. I hope it's not a kid either.

I love what Linda said, and think Peggy's idea is brilliant. Sadly, abusers come in all shapes, sizes and colors, and they often "appear" nice to outsiders. It's only when we live with them that the nightmare behavior rears its ugly head. What's interesting is that this man is speaking to someone like this all the time, and makes me wonder if the person even realizes that verbal abuse is considered domestic violence. I don't even want to think that a kid is being treated in this manner, and forced to deal with it. A better scenario of course is that he's all alone and simply talking to himself. I'm curious and hope you get the scoop by visiting. Hugs, RO

RO, I'm wondering that too - is this their "normal"? Either way, it's not good.
Talking to himself... hmmm. That's a whole 'nother can o' worms!

We have a guy at work that when he's with our own company folks in the lab or office, every third word is an F-bomb. Nice guy, but his normal vocabulary was like the script for "The Big Lebowski". He at least reins it in if we're at a client site doing testing, or on the phone with a client. But get him alone? Holy cow, put your filters in! Guess that's his normal.

We used to have neighbors that would fight loud enough for all to hear. Very uncomfortable. And we lived in a small town so we’d run into him while out and about. Even more uncomfortable!
On the flip side, my parents had the cops called on them a couple of times by our neighbors. As a young girl, I was relieved yet embarrassed. I just hope your neighbor doesn’t get worse when he’s behind closed doors.

SR300, it is uncomfortable. Say something? Stay out of it? Hope someone else makes the call? You had the cops called on your folks - that could be a blessing... or a curse.

Brian, I've known a few "potty mouths", but they weren't typically cussing someone out. Just garden variety potty mouths, and that was clearly their normal.