I was feeling like I was putting myself last, so starting today, I'm attempting to be more organized with my time and giving myself scheduled work hours sort of.  My "shift"doesn't start until later, and already I've stopped myself several times this morning from doing work related stuff. I actually don't have any students scheduled for today, so it's a good day to start this endeavor, and I think I'll be more efficient now

And it's nice too since it's on the heels of a nice Thanksgiving.  Dinner at the sis-in-laws was a good time with about a dozen of us.  SIL and her husband really did the lion's share of the cooking and presenting, and it was all very good.  I like to think that they enjoy doing it, so as to not feel too guilty about our family taking up half of the seats and eating the most?

Magnum and I took Meego back to school yesterday for the final push of his first semester. We arrived early in the afternoon to a very sparse campus despite the dorms opening up early that morning.  So it was nice to be able to walk around and have Meego point out various things.  I think we encountered more (very fat) squirrels than people.


Anybody do any Black Friday door bustin'?  We did our usual trek to Best Buy, only because it's a short walk from our house and a recreation after all the eating.  I'm in it more for the people watching, not shopping

Friday we ventured out to Bass Pro Shop only because Meego needed a jacket.  They were doing a healthy business that day.  As I walked around, I was thinking that the typical clientele of Bass Pro would probably do quite well in an apocalypse as they seem a pretty self-sufficient bunch.  I didn't get much of a vegan vibe either.

It was a successful trip, and on the way home, I picked this up as a Black Friday Haul 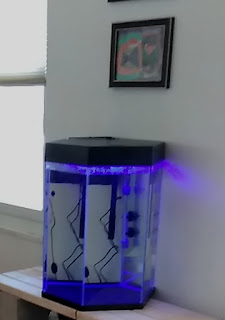 Again, I was NOT actually Black Friday shopping.  Y'all read me say that I was going to set up a new aquarium after the evil one finally bit it.  I just hadn't gotten around to it (see paragraphs 1 & 2), and my inefficiency paid off because I got this lovely 20-gal hexagonal tank at a bargain price.

So far, it has water in it and is pulling electricity.  It's a start.

Sounds like your family had a nice week. I like your new fish tank. My grandson and hubs went to an outlet mall on Black Friday - now i can't get my hubs to go shopping - but Andy did. And they stood in long lines at the door. Andy came home with four pairs of shoes and hubs one. He has to take two back. That kind of shopping drives me nuts. lol

Chatty, I hear ya. A friend of mine posted a photo on the way to the outlet mall - bumper to bumper traffic! I'm sure the lines in the store were similar. Not my idea of fun.

I HATE to shop so you will never get me at the stores on Black Friday. Online of course. But I am probably the only woman you know who hates to shop. Always have.

BTW, that is one fat squirrel.
And you comment about vegans at Bass Pro Shop made me laugh.
Sadly I have been in those stores a few too many times since I live with someone who finds fishing Zen like. He would bribe me to go with him because they had circus peanuts at checkout. Too funny. Now i can't eat them because of celiac and they have wheat in them. I have not been back. :-)

Margaret, strangely, I also hate shopping except with my kids when they need stuff. Don't need any Bass Pro peanut bribes for that!
As for those campus squirrels, I'd bet money they all have diabetes.

No thank you to the crowds of shoppers!! It's all about family and chilling for me!!! I love the new tank...can't wait to see the fish you choose!!!