Yes, like Plankton, I went to college.  But I lived at home with my parents during my freshman year, and by the time I transferred to the university, I was already living off-campus. I wonder, did I miss much?

But I never had dorm food nor communal showers.  No awkward aftermath from ending a relationship with a fellow hall dweller.

On Tuesday, we went on a campus tour of Meego's college of choice.  In fact, he's already enrolled, we're just a bit late in touring the place - scheduling, y'know?  We knew enough about the university already, the tour was merely added information.

As expected, it's a lovely campus, and our tour guide was bubbly and positive as every "student ambassador" I've ever met is. Everything is "awesome".

The dorms were similar to what I've seen before and to what Chaco and Wolfgang lived in as freshmen.  Quite tiny, but functional. 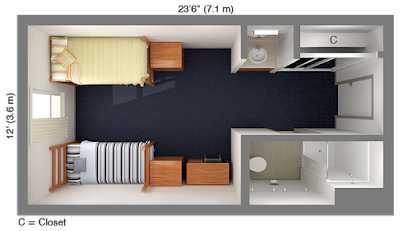 Maybe they're sparse so that students don't spend a whole lot of time there?  Plus, it cuts down on mess potential? As I recall, I wasn't home much during my college days.  Pretty much everything I needed was on campus, except for maybe a change of clothes.

Linking up with Mama Kat for the prompt:
1. Share a college memory.

Oh I had roommates. 4 of them. One of them had a stick up her butt and we all walked on egg shells when she was there. She would even yell at us if someone was studying "the wrong way" to her. She drove me bat shit crazy but you have to get along. I have always said college is about more than book learning. I learned for the first time really how to deal with people I didn't like. How to navigate that certainly helped me later in my career.

Yep, definitely about more than book learning. And, how dare you study the wrong way!

As someone who has lived in an all-girls dorm for the past three years of college, I have definitely had my fair share of drama! :P My current roommate likes to gossip and get into all the drama of other people's lives, but I stay out of it (which allows me to live drama free haha). I don't think you missed out on much if you were on campus all the time :)
-Jenna <3
Follow me back? The Chic Cupcake

No, I don't think you missed anything. I was in the military first before college, so I had plenty of dorm living experience already. Such things can be either a great or miserable experience. Nowdays, with the miracle of internet, kids can link-up with their future college room-mates. (Did Meego do that?) My niece wanted the "college dorm experience," even though the university is right in town where she live, and met her room-mate by internet, but once they were in the room together, that room-mate had an secret agenda that my niece and her should be best buddies and go everywhere together, while my niece had no such plans. It made for an obnoxious almost creepy roommate experience. She moved back home the next semester. On the upside, though, she's presently doing the Disney internship and lives with 4 other girls in the Disney student housing that she gets along with very well and is having a fantastic time.

I never had a vaginal delivery; instead 3 c-sections. I know... where did that come from! It was the first thought I had after reading your "never" line. :)
By the time I "planned" my 3rd surgery, I had realized that I wouldn't get any great "life points" for natural childbirth, so I'd moved on. Having lived in dorms, I'd say no points for that either. The living independently, yes.
YAYYY FOR MEEGO!

Wow, three years! That would make for plenty of drama!

Yes, Meego has the roommate app - "It's kinda like Tinder". He's trying to room with a friend from HS, but has also found a "mate" on the app. Hopefully not a stalker!

Ha! This is like that drinking game - "Never have I ever had a vaginal delivery - DRINK!"

I did exactly what you did, transferred 2 years in and lived off campus. I do think I missed out on the bonding that happens in those years. And I'm not as attached to the university as a proud alumni should be. It was just a means to an end for me, but like you said, still plenty of debauchery to be had off campus too.

You're right, I think being dormless makes us less attached. I think of my friends and the experiences from my major, but the university as a whole is just "someone that I used to know".

Wow, a toilet in the room? My dorm experiences were basically on-campus apartments. Freshman year was 4 people in 2 bedrooms with full bathroom and kitchen etc. Sophomore onward was 6 people in three bedrooms with 2 bathrooms, kitchen etc. Not terrible, if a bit crowded at times.

Wow, sounds posh for freshmen dorms- they actually trusted you with appliances? I'd never seen kitchens kick in until sophomore year.