I gave in and got a new phone yesterday.  Maybe it was peer pressure?

First, Harry and Meghan got hitched.  I did not get up early to watch, but as expected, the nuptials were nearly impossible to escape.  So many images and gifs so soon!


[NOTHING NEW TO SEE HERE]

In the afternoon, we DID watch the Preakness Stakes and the near photo finish that made Justify a Triple Crown contender.  I'm not a gambler, but I love watching these high-end horse races. 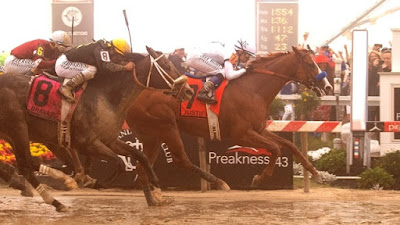 So Royal wedding, Belmont Stakes - all so posh.  It made me feel rather frumpy with my old phone, which was working fine by the way.  It's just that it has SO little memory, I could barely have any apps on it.

So I went to the phone store, and the sales person asked what I was looking for.  I explained to her that I was wanting to upgrade because my phone only had 2 gigs of memory.

She looked at me all perplexedly, "You mean you have only 2 gigs left?"

At that point, she was probably thinking "Ugh, another old person who doesn't understand her phone... NObody has only 2 gigs total".

She asked to see my phone, then swiped a few times, then,

Isn't that what I said?

Anyway, I now have a shiny new phone with a whopping 16 gigs.  It's like a bottomless pit!

My old phone camera was pretty awful unless the lighting was perfect - in that case, it was great.  The lighting is hardly ever perfect, though.  But picture taking was never a high priority for me anyway.

Now with this new phone, I thought I'd check out the improvement in photo quality.  I snapped a pic while on a bike ride, but Mother Nature didn't help out today.  Here's a shot of the Peak from the highest point of my ride. 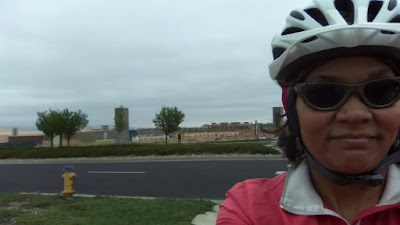 It's there, in all those thick clouds.  Hard to say if the new phone camera's better.

On a brighter note, I did have a handful of photos on the old phone that weren't half bad.  I'm a little late in reporting, but the Mother and Father Goose aren't hanging out at the post office anymore. 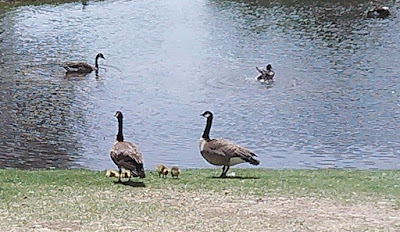 I'm not actually sure if this is the post office family since the pond is literally blooming with goose babies. But they make a nice representative family

And congrats on the gigs. Now you'll have plenty of room for photos with your new phone.

The royal wedding is EVERYWHERE. I'd never hack it as a duchess.

Believe it or not, today is the first day I saw anything on the wedding. Things have been pretty busy for me lately. Good thing I like busy.
So are you feeling posh with your new phone? Or do you still put your pants on one leg at a time like the rest of us.

Well, I did purposely look for wedding stuff. Nice escapism.
I don't really feel very posh, even with the phone. I still put my (consignment store) pants on one leg at a time.