the week that wuz

We went to the movies and listened to people munching popcorn and slurping iced drinks.  It was eerie.

Have you seen "A Quiet Place"?  Omigosh, I was screaming in my head the whole time, I think.  Just don't.  Make. A. Sound.  Breathe after the movie's over.  Anyway, it was good *despite wondering who/why get pregnant during a monster apocalypse??*

In other entertainment news, we went to the high school theater department's rendition of "The Music Man" this week.  It was very good, it's nice to see kids putting on such a show.  Meego played double bass in the orchestra pit once again and had a good time of it.  It makes me wonder what will become of these  young thespians.  Will any of them make it big?  The odds of that aren't great, but if any do, I can say I knew them when...

The post office goose couple is at it again.  Last year, Mother and Father Goose set up a maternity ward at our local post office, and it's happening again.  I'm not sure if this is the same couple, or one of the offspring from last year - I guess I should brush up on my goosology.  Either way, there are goose babies in the works again, and the post office has the area taped off for them to gestate in peace. 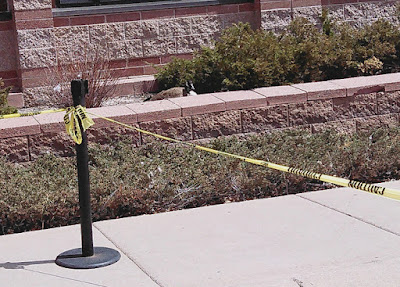 The baby daddy hangs out in the parking lot waiting to take on anyone who dares cross the tape.  It's quite masculine.  His protective instincts seem to be making up for his poor housing location choice.

I happily offloaded another P.E.O. responsibility this week:  the monthly newsletter.  I'd been doing it for about two years, and parts of it were fun, but it's nice to not have that deadline anymore.  Someone else's turn, yay.

Speaking of which, we also learned that the woman who was killed in the Southwest Airlines accident this week was a P.E.O.  I'm certain I've never met her, nor have I likely ever even been in the same city as her, but knowing she was my "sister" made it feel all the more sad. 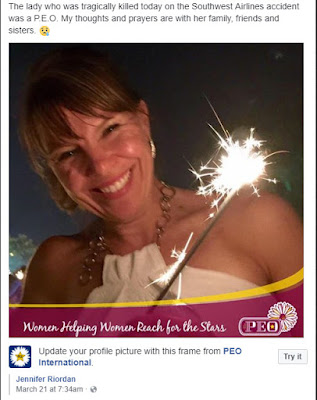 That was also my thought about "A Quiet Place". So irresponsible! Anyhow, good film.

Have not and probably will not see A Quiet Place. I’m a wimp, but I’m glad you enjoyed it!
I’ve seen a TON of musicals and plays over the last 16 years, and I’m always amazed at how good they are! Kids are talented. For sure.
When I think of Jennifer and her family, I am so very saddened. Both then I think about how amazing it was that there was no other loss of life. Mixed emotions for sure.

I knew I couldn't be the only one wondering.

It really is amazing. The pilot is a badass.

I'm intrigued by your post office geese. It also makes me happy that the post office has set up a caution zone for them.

I keep hearing about A Quiet Place. It reminds me of a book I read recently, but the "monsters" used eyes to make their victims crazy. Also, the lady was pregnant...with twins...

There's a popular goose/duck pond near the post office... except it's on the other side of a 6-lane road!