First of all, a happy (belated) Veteran's Day here in the U.S.  A few weeks ago, the principal of the school where I work asked the staff for anyone who's had a "spouse, child, or self" who served or was serving in our  military.

Yeah, okay, I figured they'd make a little window display in the office or something.  Magnum was in the Army, so I reported in.  Turns out the principal wanted to recognize all of us as a part of the school assembly on Friday.

I inwardly groaned and sat in my assigned seat.

But y'know, it was a real nice assembly.  I do like the principal of my school. Not surprisingly, he threw a very nice Veteran's Day assembly.  And the students were so well behaved and respectful!  Who were they, and what did they do with the usual kids?!

As a member of staff with a military "spouse, child, or self", I received a little commemorative plaque for Magnum, thanking him for his service to the country.

"Good job getting married!", they acknowledged.

In other ceremonies, the football team at Meego's school had their last home game, so it was "Senior night".  Not only were senior football players recognized, but also senior marching banders and senior cheerleaders. 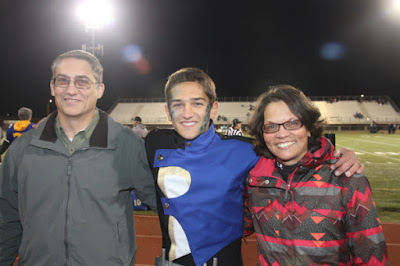 It was a nice night.  The football team won, thus establishing home field advantage for the playoffs, and the band did one last half-time show and no one fell off a ramp (because they decided to not use the ramps - it's just a football game).

And I believe my allergy shots are doing the job.  My eyes feel SO much better, I hadn't even realized how uncomfortable they were.  I'm not sure if the injections have totally cleared out my drunkenness, but the neti pot action seems to be taking care of that.

I'm not yet to "maintenance" stage, still working on desensitizing myself.  Each time I go in, my serum gets a little stronger, until eventually, I'll be able to go frolicking in a sea of pollen and mold to my heart's content!

So we're supposed to watch for stronger-than-usual reactions to the shots.  A usual reaction is where the injection site gets no bigger than a quarter.  Earlier this week, I woke up with Serena Williams arms.  My injection sites were about dollar bill size.  I was pretty sure it wasn't from my feeble attempts at strength training. 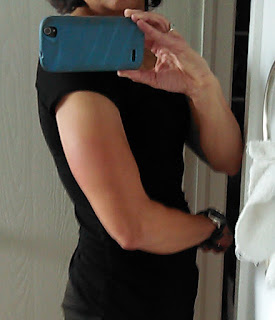 Oh well, I was "swole" for a couple of days anyway.

"Good job getting married!" You have to love that :)

That was so cool for your principal to set up the assembly for Veterans Day and to honor Magnum with a plaque.

I’ve been trying all sortsa ways to grow my arms. Who knew it was so easy? ;)
I love that your principal honored all you spouses, childs, and selfs. And I especially love that the kids were so respectful. They can surprise you sometimes. Can’t they?

It really was a well done assembly for the holiday.

Maybe the injection people can start a side business: "Get swole while you sleep!"
The kids being so well-behaved and respectful at that assembly was definitely a highlight.