Wolfgang was at the house recently, and asked me that question.  Big sandwich?  Remember what big sandwich??

"That big samwich you used to make?  In the oven?  With the french bread and the eggs...?"

A dim light started trying to come on, like a cold fluorescent bulb.  So he kept talking.

Yes, slowly it emerged from its hiding place in my brain.  I'd found a recipe in the newspaper, of all places.  Back when newspapers were sources of such things.  It had met all of my requirements for worthy of saving:


I saved the recipe and made it a few times.  All five criteria were met.  Now, I don't really remember why I'd stopped making it.  I suspect that winter turned to summer and a hot sandwich from the oven wasn't appealing.  I generally tell the oven to take the summer off.

I guess when the following winter rolled around, and maybe as kids started leaving the nest, I  moved on from the big samwich.

But Wolfgang remembered, and he wanted the recipe.  Heck if I could find it.

I started googling, but I didn't know what terms to use.  We'd always just called it "The Big Samwich".    I tried things like "french toast ham and cheese" and usually just got hits like Monte Cristos and such.  Or breakfast sandwiches.  But none were The Big Samwich.

Finally, one day last week when I thought to try some more, I found it.  I don't even remember now what string of terms I used, but I decided to google images instead.  Lo and behold, there it was. 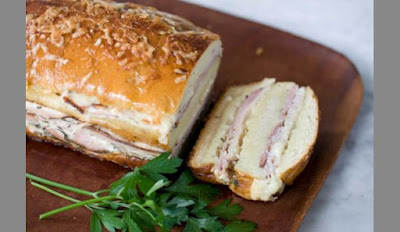 I'm not going to copy the whole thing here.  Anyone who's interested can follow [this link], which I highly recommend.

I happily texted the link to Wolfgang.  Now he could make his own The Big Samwich.  And so could I.  I decided to make it last night.

I mean, it is really easy to make.  I mainly couldn't remember what temperature to set the oven and how long to cook it, but I memorized that when I found the recipe again, so I didn't pull up the recipe when I made it last night.

Word to the wise.  Line your bread pan with aluminum foil and spray REALLY Really really good with cooking spray.  And DON'T forget to spray the foil piece you use to cover it as it bakes.

I sort of sloppily lined my bread pan, and lazily sprayed.  I totally forgot to spray the cover foil.  Plus, I didn't really mush the egg into the bread so much...

But it was edible.

It wasn't necessarily pretty.  I should have taken a photo in order to appreciate the full juxtaposition of my finished product and the image shown above.  But no, that might ruin the appetite.

Live and learn.  And I'm happy to have The Big Samwich back in our lives.

That looks pretty yummy. I think my kids would eat that also. :)