a most boring diary, but I still got paid

Another week down, and we're back to standard time.  Can we just stop with the time changing already?!?

A while ago, I got a request from those Nielsen people to track our household TV viewers.  I told them we didn't watch much, but they sent me a diary to fill in for this past week, and two dollars.  A whopping two dollars.  I was obligated.

I thought it seemed kind of antiquated to be filling out a paper diary by hand, but maybe they figured that would be the preferred method for an old lady like myself.  Suffice to say it was  mostly blank, showing nothing but some occasional local news and football and the World Series.  How 'bout those Cubs?  (I don't follow baseball at all, but apparently that was a big deal)

I had to write down shows for whenever the TV was on and who was watching and for how long.

Meego logged exactly zero minutes of TV for the week.  He just doesn't watch it.  He plays plenty of computer games and watches plenty of YouTube, but do teenagers really watch TV anymore?

Speaking of Meego and other things to do besides TV, our city threw it's annual Veteran's Day parade yesterday.  His marching band was one of the entries.  We have a lotta lotta military here, and they are much appreciated.  The Veteran's Day parade always gets a good turnout. 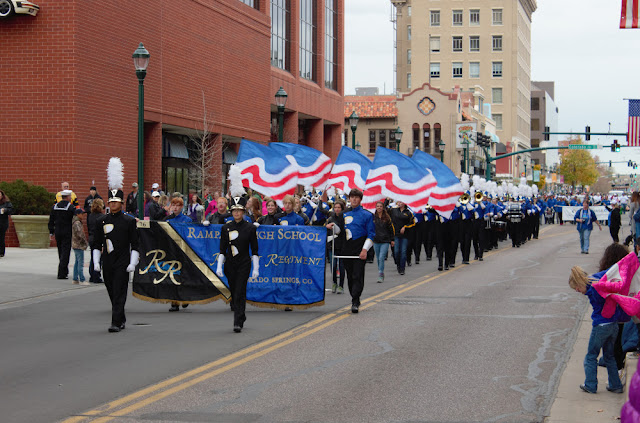 They made a nice showing. As a former flag girl, it surprises me now the number of different flags the bands use.  In one field show, they must've used four or five different flags.  And for the parade, they broke out these red-white-and-blues I'd never seen before.  Nice touch. 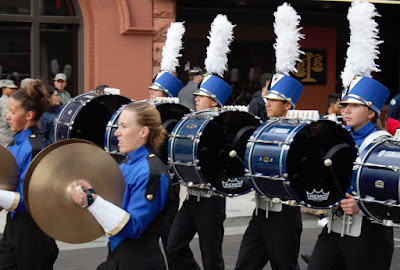 I actually missed the parade as I had P.E.O. yesterday morning, but Magnum went, so he's to thank for the photos.


As always, the parade was well received.  It highlighted women veterans this year.

After P.E.O-ing and parading, Magnum and I went out in nature for another weekend hiking/geocaching adventure.  We're trying to do this each week until the weather turns to crap, in case no one's noticed.

Yesterday's outing took us to Black Forest, where we hadn't been since the big fire of 2013.  It's coming back, but there are a lot of burned up trees and scarred up areas. 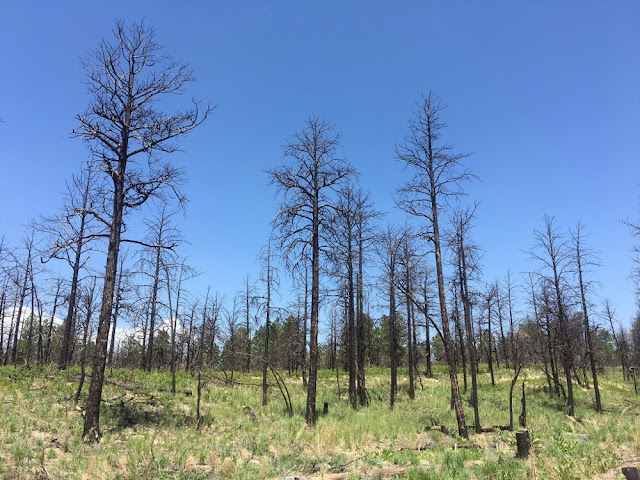 It used to be Black Forest, now it's more a BLACK Forest. 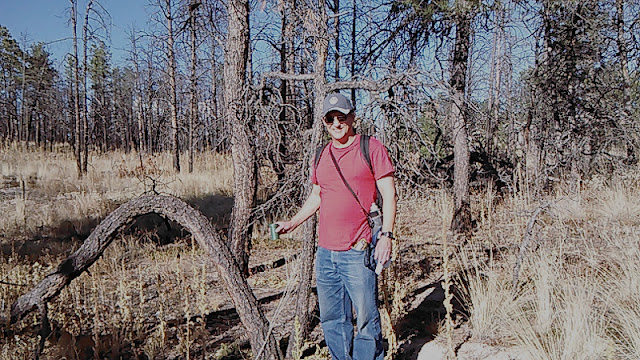 There are quite a few fun geocaches in the area, though.  We added several to our streak.

Although we don't watch much Nielsen-tracked TV, we do stream us some Netflix.  We just finished season 6 of The Walking Dead.  Since Netflix is a season behind, the cliffhanger at the end of season 6 is no cliffhanger for me, but Magnum has managed to remain in the dark on that one.

And I'm glad to  not have to write in that TV diary anymore.

I never watch tv at all, it wouldn't take me long to write a diary about how much TV we've watched this week. Erm none. But I do watch clips on You Tube.

I probably spent more time filling out the information in that diary than I spent watching TV. I shoulda held out for more money!

I used to want to keep a diary for the Nielson ratings, but nowadays, my diary would look much like yours. Anymore, I only watch The Voice and that's only if I'm off on Monday nights. Although the election is getting my full attention tonight.
I like the red, white and blue flags too. Sharp looking band!
Fingers crossed for a few more good weekends for ya. They'll be coming to a close soon. :/

On the election coverage, I kept wavering between "I can't watch!" and "What's the latest?!". Today, I'm steering clear of fbook and glad I don't twitter. In the meantime, cute babies and dogs video therapy on youtube, then back to work.

I only watch a few series on cable tv, mostly cooking channels, some discovery nat geo stuff and a few action / comedy series.
I just love 'the Blacklist'.
Played a lot of games too. Youtube for the funnies and how-to.