champeenship upset, and finding the dead!

Yesterday was the Colorado state high school marching band competition for Meego and company.  It was a great day out, and the band put in a good solid performance for a respectable 4th place finish.

They had a fun show.  Despite my somewhat dislike for all the "drama" that's been added to marching band in recent years, their show didn't go overboard.  You can maybe make out a huge rocking chair in my grainy photo, and some smaller grainy rocking chairs.  The title of their show was "Off Your Rocker", or as I liked to call it, "Here Come the Crazies".   Flag girls in straightjackets - what's not to like? 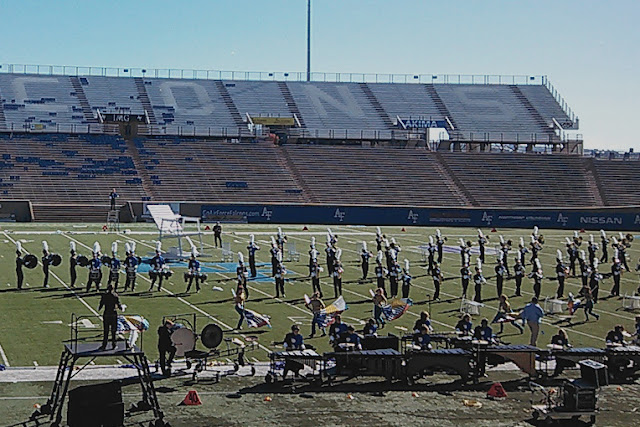 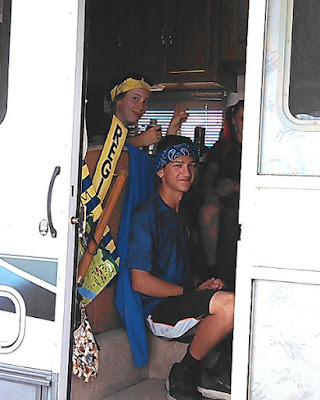 The big story in local high school marching band geekdom, however, is that the band who always takes first place (AFP) was edged out by the band who typically takes a distant second (TSP).  Seriously, it was a major upset.  Both bands are Colorado Springs bands here in our school district, so the air is thick with it.

The nice thing is, AFP didn't fall to second because of major mess up, but rather TSP just really turned it up to take the prize.

Meego gushed about it since AFPers are known to be quite snobby about their AFP-ness, while the TSP band is a group of pretty nice kids.

I volunteered for lunch duty, so that was fun too since I really hadn't done much volunteering for the band this season.  It was nice hanging out with the kids for a while and catching up with the other volunteer moms and dads.

The band stayed on for a full day of bandness, but since the competition was held here in our fair city this year, Magnum and I still had a few hours of daylight left to go play.

We explored a new-to-us trail - Seven Bridges Trail - which is a very pleasant hike through the woods that follows a stream and includes *SURPRISE!* seven bridges. 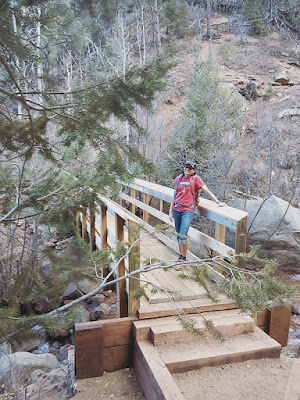 We ventured a little further as the trail continues on a much larger loop, in search of a geocache.  The name of the cache is "Goodbye Old Friend" and was described as being left in honor of an old friend who had passed away.  More details would be found in the cache, and we were advised to "enjoy the hike and take a moment to reflect".

I really wanted to find it (1) out of curiosity for the whole story, (2) to honor the old friend's memory, and (3) to "take a moment to reflect" in this serene area of the woods off the busier trails.

So it was very satisfying to locate the thing after a good bit of hunting.  The cache container was actually the housing of an old Garmin GPS unit.

I opened it up, brushed out the dead spiders (EEW!), and began reading the story out loud.  It told of a hiking companion for over six years that had eventually weakened and died.  As I was reading the detailed account, I kept wondering who this companion was.  A friend?  Wife?  Girlfriend?  Dog?

Eventually Magnum interrupted, "It's the GPS"

Oh, duh.  Sure enough.  The owner was talking about his old Garmin GPS that had accompanied him on many a hike and geocache hunt before "breathing" it's last.  What a fitting memorial. 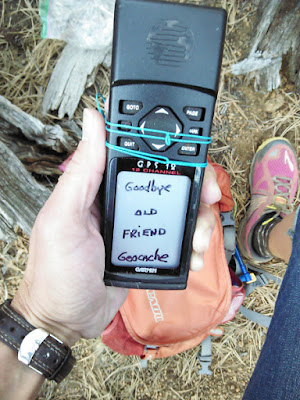 We signed the log and did our moment of reflection.  I realized we do place sentimental value on inanimate objects that have shared in certain adventures.  Even I - and I'm not particularly sentimental about "things" -  have been guilty of this.

On that note, I'll share these Sock Guy Men's Chain Socks that I recently won as a Pedal Perks prize and wore for the hike. 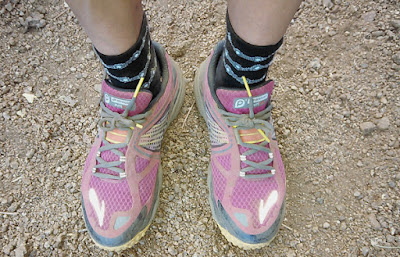 How come you win so many competitions and get so many prizes? I've never won anything in my whole life. Actually, maybe that's because I don't enter any competitions.

I think you found your answer :)

Gotta love a good upset. 'Specially by the nice guys!
I wasn't thinking of the Garmin as being his companion either. "Duh" for me too.
Like the chain socks! Probably best not to use them as a cache container once they've breathed their last breath though. Talk about eeeew.

I have to imagine those nice band kids are still on cloud nine. The not-so-nice ones were due for a bit of humbling. Just when I thought the whole thing was rigged...
Ooh, probably right on the end-of-life plan for those socks!

Loving our inanimate object....
I do talk to my car when I was driving :)
I believe there is a soul in an object we always use.
That's why we give them names.