acting busy 'cause it's hot out

I'm blogging from the university.  I probably look all studious doing so.  If they only knew...

Summer classes started this week, and I have just one.  It's a leadership class and I like it so far, follower that I am.  Wolfgang has moved back home temporarily.  He and Meego made the bedroom work with a bit of rearranging.  I've noticed my recent tidying efforts being compromised, but I'm managing to contain myself.

It's very hot today so I'm reluctant to head back home since (1) the university library is air conditioned, (2) the tidiness issues mentioned above, (3) my bicycle expects me to pedal it in order to go forward, (4) pedaling when it's so hot out is sometimes not fun, and (5) waah.

As I was riding here, I came upon what looked like a very fresh traffic accident.  There were three cars pulled over just off an interstate off-ramp, all of them with their hazard lights aflash.  There was a young guy - looked to be early 20s - sitting on the ground outside the driver's side of one of the cars.  A couple of other guys looked to be fine and walking around while yet another healthy-looking man was on the phone.

They were signalling traffic to proceed around them, so I didn't stop as it looked like the situation was under control and I would just get in the way.  In hindsight, I could've offered some water to the guy sitting on the ground.

One thing that struck me as strange was that there didn't seem to be any dents, scratches, or whatnot on any of the vehicles.  Nothing.  So I wondered if it was a fender bender or was the kid on the ground in the midst of some sort of health problem?  As I wondered, I heard sirens approaching from the distance, so help was apparently on the way.

In another news update, I've been going regularly to that new gym trying to do strength workouts I've found on Pinterest, and that's not nearly as wimpy as it sounds.  I haven't really done much of this stuff since high school, and it shows.  Clearly 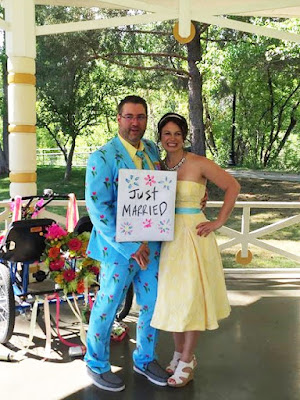 And in other other news, that nephew of mine got hitched.  You can tell by this wedding photo that they're a pretty pompous couple *SARCASM*

Too fun.  Before anyone asks, I have no idea where he got that suit.

It's hot here too! I keep checking the calendar thinking it's August. 'Course I'm not complaining.... Because I love summer.... But it's hot!
Glad to hear you're getting good use out of the gym. For whatever reason, I can't bring myself to do any strength workouts at the gym. I use it for cardio in between runs, and I do my strength training at home where no one can see me. Self conscious I guess.
I absolutely LOVE that wedding photo! What a cool couple they must be! :)

I always combine some cardio with strength training, but I think I need to mix up my routine. I keep checking my pipes and they don't appear to be getting any more defined. Which maybe isn't a bad thing. Don't think I'd look good with Popeye arms.

We've had some heat and a LOT of humidity around here. Whenever someone complains, I say, "At least it's not snowing!"

That wedding photo is spectacular! I'll bet it was a FUN wedding!

Yeah, most everyone is dealing with the heat.
I *thought* I was doing strength training at home, until the other old ladies at the gym shamed me... Oh well, let 'em look.

Yes, at least it's not snowing...
I use the gym for strength training after I injured myself swimming. Slowly. I've learned that strength is apparently not one of my strengths.

My wedding, several years ago was considered a wedding of the year in my county. It was huge, lavish and my parents-in-law spent a lot of money to make it so.
And i divorced their daughter two years after that.
A story worth for a soap opera :)