I remember him sitting there.  George.  He was kicked back, all relaxed looking.  We'd just gotten off work and were hanging out after having discussed our sexual and drug habits...

"You know you live a boring life when you're allowed to donate blood", said George.

"Yup, I suppose so", my reply as blood drained from our veins.

Many years ago, I made a New Year's resolution to donate blood at least three times a year.  It was easy.  The blood letters came by regularly to our workplace.  We could just stop in after work before heading home.

Anyway, that was quite a few years ago.  I just got out of the habit.  There was a blood drive at the university on Tuesday, so I decided to see if I was still boring enough.

I found it actually quite relaxing, just as I remember.  And the staff is always so friendly and appreciative.  Plus, free snacks after!  I sat down to begin, across from this kid - likely an undergrad.  It occurred to me that a blood drive is probably a good place for single people to meet "safe" potential mates, much like George had alluded to.

Anyway, the guy was sitting there and he had a wet cloth draped over his forehead and there was a box fan blowing directly upon him.  Maybe he'd gotten a little woozy?  I learned he was doing the "big boy" procedure where the machine draws out two pints instead of one, separates out the plasma, then gives the rest back.

No thanks, I just did the one-way procedure.

He noticed that the blood people were wearing either blue, green, or burgundy scrubs and asked, "Do the colors of your scrubs mean anything in particular?"

"You bet it does!", replied my nurse, "It means these are the colors we each picked out of the closet today!"

Look at at that, dinner AND a show!

Then yesterday, I was about three miles from home when I guess Bella felt sympathetic or something.  I heard this click-click-clicking coming from her front tire and looked down to see something going round and round.  It looked shiny.  It looked metallic.  I was really hoping it was just a rock caught between treads, but the logical part of my brain told me it was something sharp and man-made.

I contemplated stopping to inspect, but instead chose to pedal like a bat outta hell to see if the LITTLE PRICK would stay in so as to keep the air loss at a minimum and allow me to make it home before things got all squishy.

Happily, that strategy worked without a minute to spare.

Here's the thing before I carefully surgically removed it all psssssssshhhhhhhh... 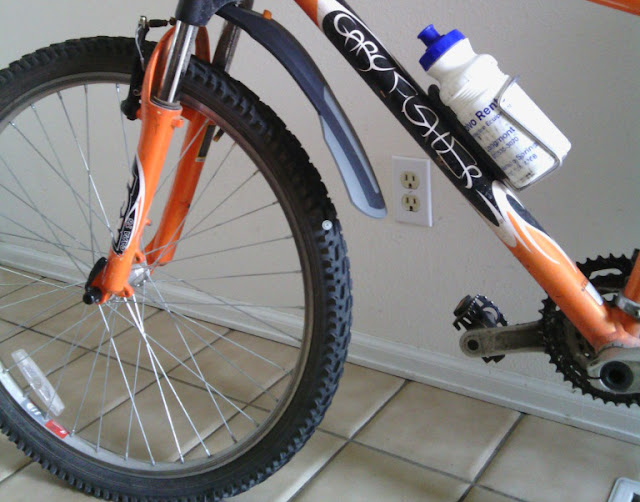 I think it's a screw for holding on a license plate.

Yet another evil "Car vs. Bike" story!

What a great idea to combine giving blood with a dating service. They could call it True Blood...or something. That's not very creative and I can't think of a funny name at the moment, but there's a joke in there somewhere. Poor Bella. Glad you got home without having to walk it.

The way you started... I'd never thought of it that way... but you nailed it!
The last time I tried to donate, I was rejected. Small veins, which I've "always" had, but they're getting more particular. The phlebotomist then scared me with what could happen if they ruptured my vain. I haven't been back since... after 25 years of occasional giving. But, I might brave it again. They said if I drink lots of water in the preceding days, my veins might plump up.
Give my regards to Bella.

Yeah, forget blood drives on Halloween. Let's do them on Valentine's Day! "True Blood", I like it.

I've been told I have good veins for donating. They've actually asked Magnum to stop trying because he has such "stingy" veins. Good luck with the plumping!

Good for you, Abby! I was rejected the last time I tried due to having traveled to Costa Rica in the last year, but I should be reliably malaria-free now. I'll have to schedule it. A friend of mine always tells people how donated blood saved his life.

I haven't donated blood since high school when there was a snowstorm, and the bus that would have taken me to my job didn't show, and so I walked a couple of miles to work where I immediately became nauseous and woozy.

I should get over it and just donate again.

I was thinking of my last experience while reading about you riding Bella and thinking that was brave of you to exert yourself so physically after donating blood. Then I realized it was a day later and you'd probably recuperated by then. Glad that you were able to make it back home before the tire was completely flat!

It seems kind of "primitive" to me, in the big picture - taking people's blood so it can be used for others who need it in an emergency. But until something better comes along, it really does save lives. Glad to hear about your friend!

Walking a couple of miles in a snowstorm after donating a pint of blood is not good, as you learned the hard way! Give it another try and pamper yourself afterward.

I heard that the plasma takes about 24 hours to replenish and the red blood cells take several weeks. So I actually took the metro bus home after my donation, or I would have been flatter than Bella was the next day!

Alright. I'll admit I've never given blood. It's scary to me for some reason. And you say it's relaxing?

Glad to hear you and Bella made it home safely. You're so lucky to live in a bicycle friendly community. (I mean, other than license plate screws laying around all willy hilly.). There were a lot of bicyclists in Florida as well. We have virtually none here. Maybe if they build it, they will come?

I do find it strangely relaxing. Maybe it's those "recliners" they put us in. I admit that I can't look at the tube once it's in my arm. I'm fine looking at other people around me, but the sight of my own blood draining into a bag freaks me out.

I think more places are becoming bicycle friendly as bicycling is appealing to more commuters instead of just the spandex crowd. Build it, see what happens!

I don't mind being anemic because it's the perfect excuse for me to not donate blood. I am too phobic in that department. It's all I can do to give a vial or two for my own annual tests. (I faint every time.) I do my good deeds by giving money, and that'll have to be sufficient.