When I was in middle school, I rode a bus to school.  Our bus stop was down the street in front of another family's house.  The family was from California, and their kids also rode our bus.  The rest of us would show up well before the bus arrived so as to not miss it, but the kids in the house could wait until the bus arrived before coming out.

We would wait outside, and we could see the kids in the bus stop house watching TV while eating cereal.  When the bus rounded the bend, we outdoor kids would automatically line up in our public school Pavlovian fashion, signalling to the insiders that it was time for them to come out.

Until one day.  One day, as we waited, it started to snow.

The bus stop house kids came running out, all awestruck.  They didn't have jackets on yet, but they just kept looking around in wonder.

"It's snowing!", they exclaimed the obvious.

But then we realized.  Those kids had never known snow before that.  Certainly they'd heard of it and seen it on TV and such, but that was their first experience.  I remember that moment vividly. It was interesting to me to see someone my age encountering something for the first time.  Something I took for granted.  I have no memory of the first time I saw and felt snow, it's just always been around.  But those kids... they were totally rapt.

A few years ago, Wolfgang had a friend, also from California, who'd never seen snow before.  On our first snow day from school, he came over very early in the morning, wanting to play in it.  He had on a jacket, but no gloves, no hat. He soon learned.  Near hypothermia is a good teacher.

This morning we woke up to fresh fluffy snow, and I was remembering those kids experiencing snow for the first time.  Yeah, it's messy.  It's cold.  It limits our activities.  But it's also pretty and kinda fun.  I dragged China out for a walk.  She used to love a good romp in the snow, but as she's gotten older, "love" has been demoted to "like".  Good enough.

China looking forlorn.  Or maybe it's just me projecting: 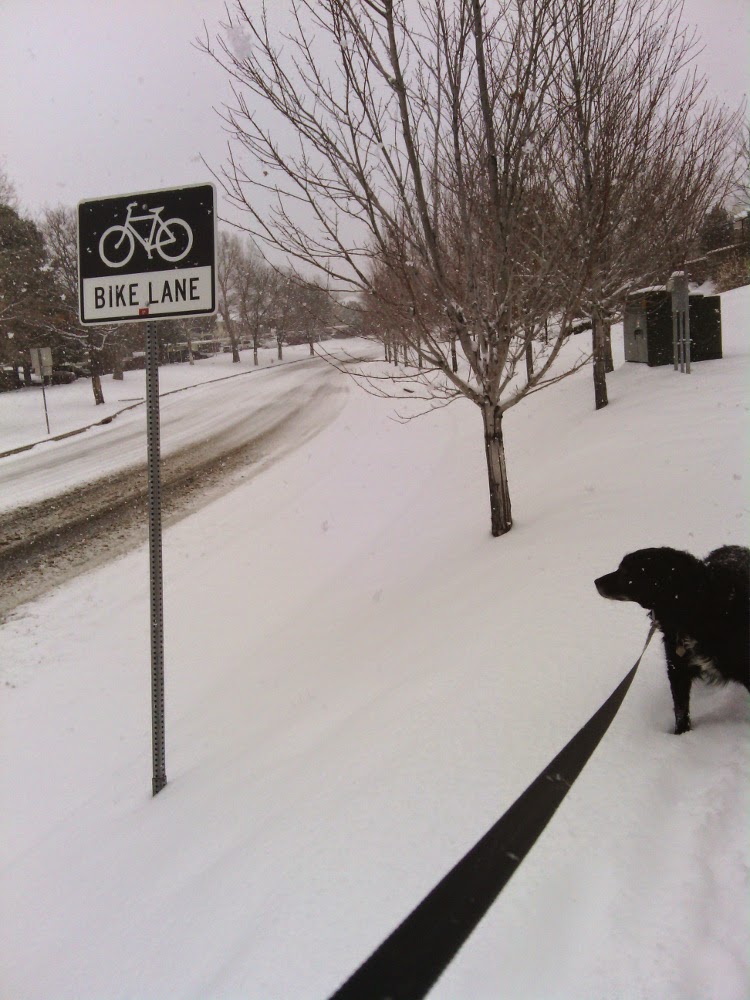 Oh, who's she kidding.  She still loves it! 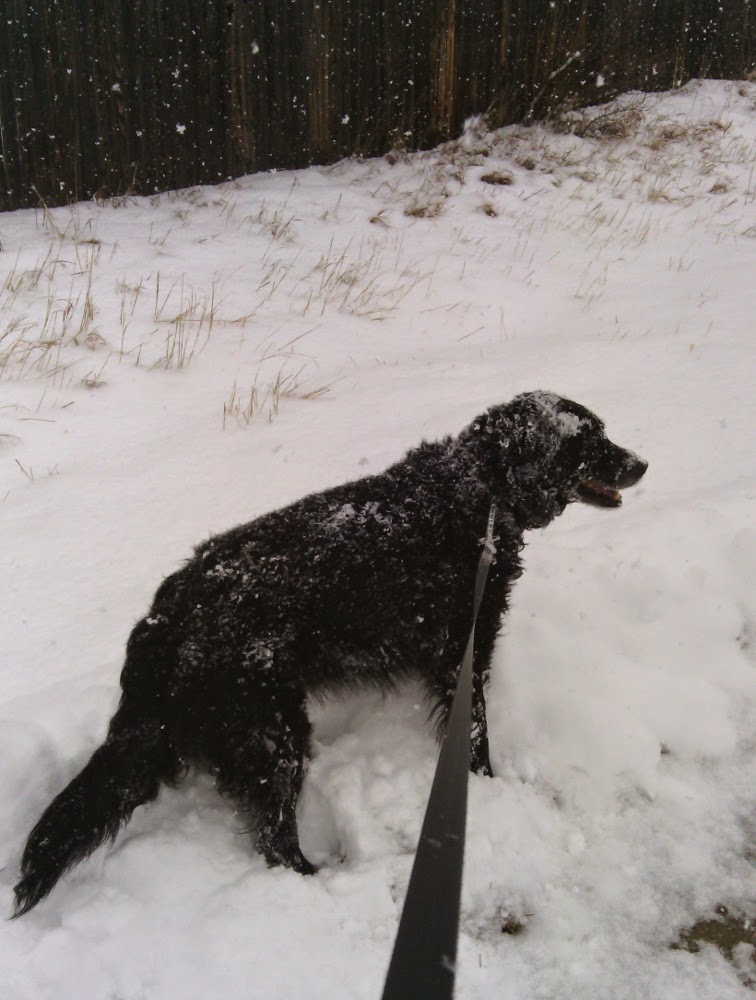 I never known a time when we didn't have snow either. And as much as I'll gripe about it at times, I often can't help but watch it fall and feel that sense of awe. And Lucy? She LOVES it!

You know, I love snow. It really is pretty and kinda fun. I wish we'd get more of it here. Instead we get ice, or cold rain, or just cold.
Fun story about your California neighbors. My guests are often seeing the Arch for the first time, and are always so rapt. They help me see it in a different light.
Enjoy your snowfall! Has Elle Mae gotten a chance to play in it too?

I still recall my first snow experience. We lived in south Texas in my early years but my dad got transferred to New Jersey when I was about 7 years old. We moved up in the summer so we had no idea what to expect of the upcoming winter. We had a big old house with a giant hill in the neighbor's yard (did not realize the significance of that until the first winter). The first snowfall we had was 2-3 inches and we went redneck crazy. No real winter gear, we were romping around in snow with 40 layers of clothes and wearing bags on our shoes to keep them dry. Our next door neighbor was a life long Jersey resident and she looked out of her window in the morning to see a bunch of crazy Texas kids just running wild in the snow. That first winter, we just couldn't get enough. Of course, as we got older and had to shovel/plow that long driveway (multiple times), the new wore off quickly.

It has snowed down here once or twice in the last 20 years but nothing more than a dusting. The first year I had Grayson, I took him to the park while it was snowing and he had the same reaction as we had when we were young.

I grew up with snow too, can't remember my first time!
China looks like she is having fun. Custard loves it, Frou Frou hates it...

Did you bust out a sled? I would have!