Even though it was my choice to leave, I've missed my ex over the years.  We had many good times together, laughing, celebrating, working toward common goals.  Oh, it was work, but it was all very fulfilling and worthwhile.  But, then it just seemed it was time to go.  So I went.

We've kept in touch, my ex and I, over the years.  But after a while, the cards, letters, facebook updates, etc. just weren't enough.  I was ready to put myself out there again.

So I started dating, playing the field.  I was going out nearly every week.  I met some really great people, and I also admit that there were some nights when I realized I would be enjoying myself better at home.

Eventually, I got tired of the whole dating scene.  So exhausting, really.  Okay, so it was kind of fun watching them all fight over me, but enough already.  It came time to make my intentions known, so I did that, hoping I wasn't being too cryptic.

Then I just let it float out there, gave them all some space to think it over and hash it out, whatever they had to do.  And then this arrived: 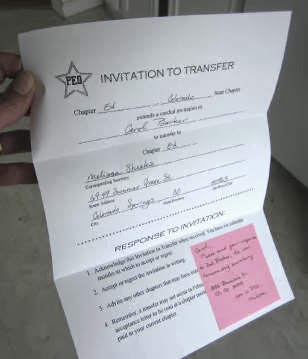 I can't embiggen it enough to see what it is. So I don't know whether congratulations or commiserations are in order. Either way, I'm on your side.

Whatever the order sort of remains to be seen...
It's purposely ensmallened since it's got names and addresses and such. Can't trust you internet people.

Ooooh!! Did you say yes? And when's the big date, huh? And how about your ex? Is he (she?) okay with it all? I bet so! Your happiness is all that matters, I'm sure!
Can't wait to hear more!

I said yes, then immediately began to wonder if this was the "right" one! There's almost too many fish in the sea, I tellya.

I'm trying to think of something clever and naughty...

I'm sure you won't disappoint.

Hey, congratulations! I know you thought long and hard about this relationship. So glad to hear your both willing to commit to each other!

I'm sure the ex will always remain fond of you as I'm sure you were a good time while it lasted.

On to new ventures!