I can't quite remember when it began.  These... these... kids really.  They just started showing up on campus about once every one or two weeks.  They're hunting me.  Groupies I think.

I don't even really know why.  What is it about me?  ME?!  But I just can't seem to get past them.  They, with their smiley outgoingness.  Their happy greetings.  Their armfuls of junk!

About two miles north of the university, there is a new apartment complex being constructed.  It's not part of student housing, but it's clear that the target market is university students.  So every week or so, these young cheerful people infiltrate the campus with these... these THINGS!

Here's just a sampling of what I've had to take in in just about a months time: 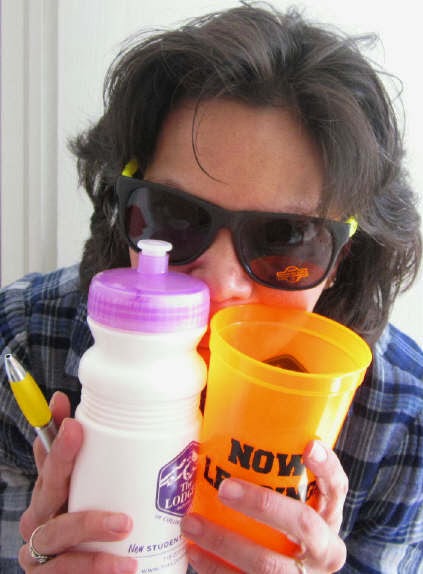 But now I've gotten to the point that whenever I see the promo-junk-horde, I'm a bit curious.  What typical-Run-With-Lumber-participation-prize thing can they be pummeling us with this time??

I'm so hoping that lip balm is next!
.

Oooh. I hope it's lip balm. All that other stuff looks like it's just a burden. Well, maybe except the t-shirt and the cool shades. Whatcha gonna do with your new stuff? Really. I want to know. Because I have tons of that kind of stuff, and I hate to throw it away (being 'green' and all), so it just clutters up my cabinets.

All I get are paper cups at Dunkin Donuts......is there a secret? FREEBIES?

I want lots of plastic things to complain about too!

That is the kind of stuff I stash to put in Christmas Child boxes just before Christmas. I can send freebies; it just has to be new. Free stuff means I can do like I did this past Christmas--put together boxes for $0.83 each. I can take it off your hands!

Donate your bounty if you cannot hide under your desk from them.

The best promo on a campus I have ever seen was where if you signed up for a credit card you got a free super soaker water gun. The campus was like a battle ground that day!

Ah, the always present "gimme" swag. We have a whole collection of cups, shirts, hats, key chains, and, of course, koozies. Lots & lots of koozies. A good portion of my trailer is stocked with such swag.

Great idea! I think snowball packer/throwers would cause a wonderful ruckus!

It's ALL sitting in the donation bin, waiting for the next truckload. Except for the pen/highlighter because that thing's pretty awesome.

No secret that I know of, but I have enough water bottles with logos to fill all the paper cups at Dunkin Donuts!

Lip balm I'll use, but it'll probably be mini frisbees. It all goes in the donater bin. Except for the coozy. Thrift store coozies are depressing.

Maybe we should get a trailer?

Is there such a device?

You, the minimalist, must have a particularly hard time accepting all of that junk... I mean, those gifts!

The young, cheerful people? They don't mind that you already live in a comfy house of your very own?

Yes, lip balm! Lotion! Bath salt! Give me something useful, damn it!

Lib balm is good.
I say, bring back plain ol' number 2 pencils!
Next time they attack, oops, I mean confront you, ask'em what else they got.