Anita notes:
"I see Guano checking in often... your mention of the other brother makes me curious about him."

Not the first time that's happened.  Surely, I've mentioned oldest brother Hagrid here before, though, since he's got the blog name and all.

Even these days, I'll be talking with someone I went through school with and I'll mention Hagrid, and they'll be all, "What?  I didn't know you had another brother!"  Hagrid probably gets the same from his classmates, "What?  You have a little brother and sister?!"

I hardly remember the time when Hagrid lived at home with us.  He left for college right after graduating high school, and so I mainly remember him coming home on breaks or us going to visit him when I was a kid.

I need to mention first off that Hagrid is a scientist for the gubberment.  As such, photos of him aren't allowed on social sites.  Nevertheless, I present here, brother Hagrid: 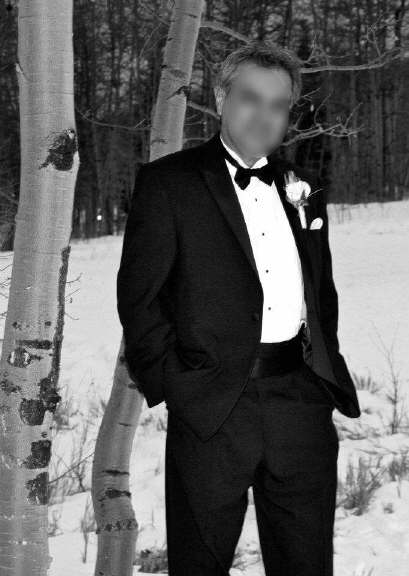 Okay, I hear what you're thinking!  "Abby's full of crap - saying her brother is this secret government guy, then posts a supposed pic of him all 007!"

But really!  It's him!  So happens he got married recently, so this is a most recent pic.  The nuptials explain the tuxedo in the woods, he's not normally so James Bond.


My sister-in-law happily shared a few nice photos of the wedding online, none of which included the groom.  In her words,

"That's what I get for marrying Mr. Get Smart."


When I was a kid, brother Hagrid was always a bit of an idol for me.  I have shadowy memories of his room, but one thing I clearly remember was his radio equipment.  He had a ham radio setup at home, long long long before the internet.   I knew not to touch any of it - no doubt that had been drilled into me from infancy - but I remember his desk just covered.  Later he told me he'd communicated with people as far away as Japan.

There was a radio antenna that towered over our 2-story house. I remember Hagrid disassembling it, climbing to the top and removing piece by piece until there was nothing left but the base.  The base is still in the backyard.  My mom put a big planter on it.

Then he had that cool government scientist job.  What wasn't to idolize?

Here's another rare photo from the archives from when we were kids that highlights the age difference a bit more. 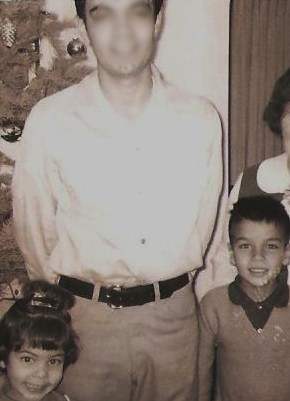 As you can see, Hagrid's appearance hasn't changed all that much.  Hopefully my hair has.


Nowadays, the age difference seems to have shrunken considerably.  He's my big brother, but I've never known him as a kid like I have Guano.  Sometimes I look at old photos or my parents will relate some story from when they were young parents with baby Hagrid on the other side of the world.  Was that really the same family I know?  Yes and no.

Much more and I'd have to shoot ya.
.

I remember lying in the back of his Plymouth Barracuda and looking up out of its huge rear window! And yes, he's definitely got the 50lb brain goin', that guy.

Awww... this makes me smile. And I feel a little emotion coming on, too. I think because I feel the love between you and the brothers, and that you are proud of the rarely mentioned one, too. :) It makes me think about my one and only brother who went to live with Dad after the divorce, making him not totally familiar to me either, though I saw him often during our separated teen years. Joey works for the gubberment, too...as a well loved and respectable mail carrier in the rich folks neighborhood. :) However, he's also a shrewd landlord of a few houses. At the moment, I smile as I think of him.

Thanks for addressing my curiosity. Love the cutie pictures, Pebbles...Oh, did I say Pebbles? I meant Abby.

Love, love, love this story! Probably because it's so different from my own. I think it would be cool to have a sibling so much older to idolize. Instead I have a wee bit younger brother who, at the age of 43, is finally able to keep a job and stay on the good side of the law.
That picture is so adorable! I bet your mom loved fixing your hair. My daughter tells me now how much she hates the way I fixed her hair when she was little, yet I thought she was so cute! And after 3 boys, it was fun to do hair! :)

Wow. I imagine if you told us any more details, you'd have to be asking for asylum in some south American country. I did not know you had an older brother. Interesting to learn about how life was before the family grew. I am the youngest in my clan - older brother is 7 years older than me, but I still felt the gap. Glad to hear Hagrid is still working that 007 gubberment job and staying on top of things.

Oh, of course! The Barracuda with the big bubble window!
Remember driving through town, him saying, "look at that cool car over there!" -- our reflection.

And yeah, I totally felt like Pebbles. Replace that barrette with a bone, and it's Yabba Dabba Doo time!

I remember when I asked you about siblings during our meetup. Your answer was so deadpan and unexpected, I thought you were joking at first!

If I'd had a girl, I would have endlessly played with her hair and painted her nails, I know it!

Yeah, Edward Snowden and I'd be on the same plane. You've shared a few glimpses of your brother. Has a yurt, right? Likes Hawaiian shirts? Good guy!

Wow! Thanks for introducing brother Hagrid! This all leaves me to think that you and Guano had each other, probably formed a tight siblingly bond as you were growing up, but how did it make Hagrid feel? He was the only child for a long time and how things must have changed when you "little ones" came along. Still, it's good to see that you remain close in spite of the age difference back then.