There is an ironing board with an iron atop it in what is sort of our living room.  There are three piles of folded laundry on the coffee table.  A corrugated cardboard box rests up against a wall. China's bed is disgusting.

As I type this and look around my desk, I see a small sketchpad, a couple of ultra fine sharpies, a roll of duct tape, some ASVAB flash cards, a stray rubber band, a receipt for flour...

Then there are the various piles that Chaco brought home last week.  They've been somewhat rearranged, but the net effect is still the same.  And there are all these shoes laying around.  What is up with all these shoes?  Where the heck did they come from?

In short, the house is messy.  But then I look at what's going on in tornado ravaged Oklahoma, and I am NOT complaining.  We had a brush with a tornado once.  It was eerie scary, but a sneeze puff in comparison with what moved through Oklahoma.

No, our mess is a result of a positively busy week, mainly from Wolfgang's high school graduation.  You know the high-falutin' jobs that require "high school diploma or GED?"  Well, he's eligible now. 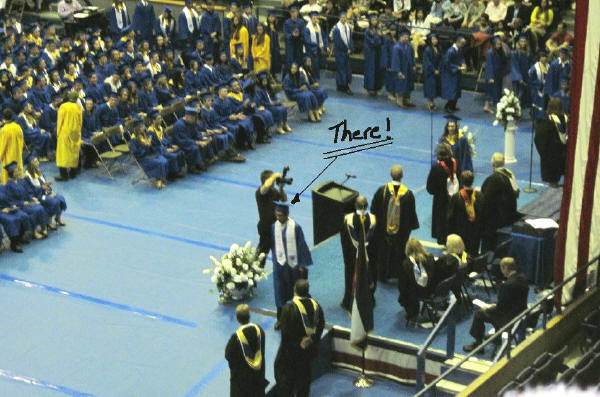 My in-laws - both sets -  have been in and out since Sunday.  Commencement was last night. In between that stuff, life goes on and messes pile up.

I also attended Meego's 7th grade end-of-year shindig.  He got a silver medal.  It was a nice little bash in the school library - nice to see kids taking pride in receiving academic awards, and cheering for their classmates.

Then last night's commencement ceremony wasn't too uppity as these things can sometimes be.  Only a couple of the speeches went too long-winded IMHO.  And it turns out that the Valedictorian was a kid I'd tutored.  I'm SO taking credit for that.

I actually spent about two hours with him last spring to share some "boot camp" strategies for his ACT.  I remember him as bright, but not at all arrogant about it (some are obnoxiously so).  He was the type of kid where a 2-hour strategy session with a tutor was enough to get him where he wanted to be.   His was not one of the too long-winded speeches either.  WOOT for him.

So now, the dust will literally begin to settle, hopefully.  But still, it's a good mess.
.
Posted by Abby at 10:33 AM

Sounds like a good time to me! You should take a bit of credit!
A box by the door will help keep the shoes in one place and less likely to trip you. :)

It was a nice ceremony, and I'm not big on ceremonies. HS graduation is a worthy milestone.
We actually have a shoe SHELF right in our entrance hall. It accommodates everyone's shoes okay, but somehow, the shoes have all gone mad and taken over!

Your house sounds a whole lot like my house. Totally messy lately!

And also, I cannot even begin to imagine what the people of Oklahoma are going through. My whole heart goes out to them.

A good mess. I need to start looking at mine the same way, since it's not likely to ever go away. :)
Congratulations to Wolfgang! Are you ready to have two away at college? I can always send you Amp if you start missing the testosterone.
Congrats to Meego too. And you, of course, for surviving the in-laws. I hope the dust settles a bit before the next round of life hits you - any news on when you start school yet?

My house is in much the same condition. Change in routine always creates this kind of chaos for a while, until we get a handle on the new order of things.

Congrats to Wolfgang and Meego and the Valedictorian for whom you should at least allow yourself a little bit of credit.

All sounds good to me. Neat houses are over rated, IMO...

Good insight into keeping things level. Comparing your brush with tornado and keeping it in perspective when you compare it to the recent one in OK shows how you are able to see things clearly. You have been having such busy days and evenings, I know you are proud of your sons. Rightly so.

Notice that I blogged about it, rather than just clean it up.

Amp is always welcome as long as he's untidy. I have a certain lifestyle standard to which I've become accustomed.

I sometimes feel like the kid in "The Sixth Sense". I see messes that nobody else sees.

Yeah, I'm proud of them all, even if they care nothing for shoe organization.
The tornadoes in Oklahoma reminded me that I'm happy to have home and family to maintain.

He's untidy alright. But judging by the length of his showers, I believe HE is clean at least....

It's the month of May... for me, more challenging than December.

Anyway, I'm happy for your whole family. And let's not forget the Valedictorian that YOU tutored!

Do you feel sort of disoriented now? Or does it all keep going without a day or week to take a deep breath?

You're right! May is busier than December. I feel we need a black Friday in there somewhere.