I've been looking into getting my teaching license.  I've thrown the idea of getting a license around before, but have wavered.  But I'm thinking it wouldn't hurt. I just think I've topped out as much as I care to in the unlicensed tutor world and need to decide what to be when I grow up.

So in the midst of all this fun, I've been chatting up current and former bosses and colleagues for references and such.  Yesterday, I was up at the school, so THAT means, another episode of What's in Crossing Guard Abby's Mailbox? 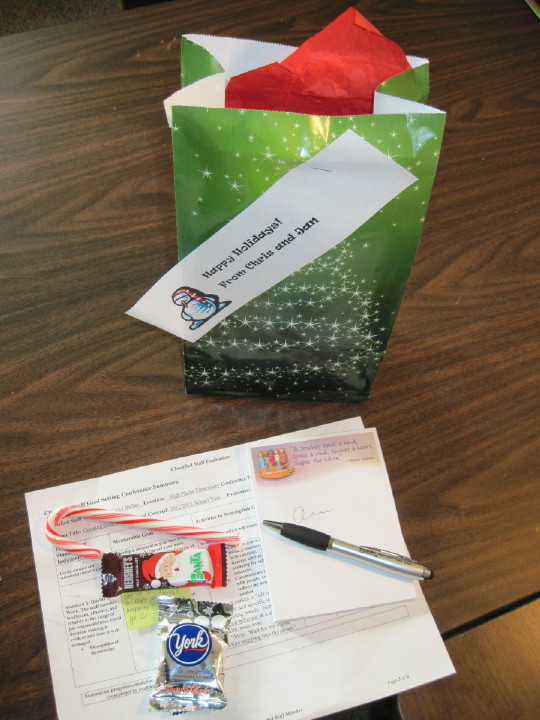 Nothing ridonculous, just a cute bag with some candies and a doodle pad and fancy pen.

I was also talking with a former boss at the place where I occasionally taught classes online.  This was based out of Denver, so when I left there, he told me he would send packaging for me to ship my tablet and webcam back to him.

I dutifully stashed the tablet and webcam so no one would screw around with them behind my back they'd be out of harm's way and waited for the packaging to arrive.  It never did, the toys stayed stashed.

So as I'm talking with him, I mentioned that I still had the goods.  How to get them back to him?  He says, "They're long forgotten, feel free to keep or donate them".

The Wacom Bamboo tablet makes for a nice memento, I must say.  And they're great for digital artwork.  I still prefer the feel of the pencil/pen/brush on paper/canvas, but no sooner had I mentioned the release of the tablet from its quarantine that Wolfgang had the thing hooked into his computer.

I really don't have a use for the webcam, so am thinking of giving it away.

Anyone out there want a Shia Labeouf webcam?
.
Posted by Abby at 9:42 AM

You're Still hemming and hawing about the license!

Those lil gifts are cute, but sometimes unnecessary :/ You dont wanna keep them cause you've got one too many doodle pads, but they're too nice to throw and may come in handy one day. It's a dilemma.

Awwww! What a lovely Holiday bag of goodies!

Yes you should become a full teacher.
Number One Son just treated himself to one of those tablets and is having great fun.

Thanks for the first sentence, I needed to "hear" that! We bought a tablet for Chaco a while ago and almost got one for Wolfgang for Christmas - glad we didn't!

Since I go to the school so rarely, it's always fun to see what I'll find in the mailbox. Stuff with a short shelf life is usually not good.

Wish I could get lucky enough to inherit some fun gadgety toys! Nice bonus! I have no use for the actual webcam. Got one built into my laptop that I never use. But if you want to send the Shia Labeouf face, I wouldn't turn him down!

Teaching (officially) seems like a good and natural transition for you. Does that mean going back to school and earning a few more credits for you first?

I think you would make a great teacher. I just hope Colorado's school system is better than ours. I got sick of the b.s., which is one of the reasons I got out. Either way, students deserve dedicated, devoted, and caring teachers - and you are definitely ALL that.
Link just bought himself a tablet. I knew he'd gotten it, but I had no idea what it was... til now. How cool is that!

If you're talking plain ol' webcam, I've always had one, but never saw any reason to use it.

What? You really need someone to tell you that you need to be a teacher (leave it to Rock to state the obvious)? Heck Yes! I concur with Rock on that call. You definitely have the coaching/teaching gene locked down. I would be one to say you need to go for the license (just to make it official). And your Holiday gift looks interesting. Not sure if I could handle the extra technology but it looks like it would be fun to try out.

I've got my own webcam too, that mostly collects dust. And yes, I'd have to go back to school and take teacher classes - that's why I've been wavering.

Thanks for the kind words! A license would open up more opportunities. I know there are certain schools and jobs I DON'T want, but I can be picky. It's either high school teacher or mad scientist, but the two are so closely related...
All the cool people are getting tablets!

I've got one for skype, but I don't skype a whole lotta.

Thanks for seconding the motion! I have to first be accepted into the "special" program, but the adviser I spoke with seemed pretty positive.
At first, I felt kinda bad that I didn't just send the tablet and webcam back when the boss didn't send the packaging, but yeah, it is a fun toy :)

I'm not going to advise you to do anything, because I just don't know you well enough...but if the idea of teaching makes you truly happy, then go for it. If you think it's just a 'good idea' then, speaking for myself alone, that probably wouldn't be a good enough reason for me to proceed with the extra education. It's too hard a job!
You know what? I really don't enjoy Skype - maybe if my husband was away all the time, but as it is...nope.

Maybe we come from some teaching lineage; can't fight the genes! I tried hard for a couple of years to land a teaching dream job and when I finally got the call, it was really hard to reply, "I can't believe I'm saying this, but I have to pass!" It was only for 2-3yrs and I had just accepted another teaching job with much longer prospects. Still wonder what woulda/coulda, though....so I say you gotta do it. Plus you're good at it.

And the webcams. How do we know they're not always watching?

Yeah, I've been "researching" the teacher license for a couple of years now. I think I've got a sort of plan...
I rarely use skype - just not necessary. It can be handy for a tutor student with a question, and visual aids are worth a thousand words.

Yeah, I rather like teaching. Maybe it's a combo of our teaching lineage and our silent-film actress lineage.

I say, "Go for it;" the license that is. If you're motivated and have the time and funds-why not? And if you get in there and change your mind, so what - unless you have something to prove to someone?

It's a hard gig from what I hear (extended hours at home, politics, lack of funding, challenging kids); HOWEVER, I think you definitely have what it takes!