Our family dentist is a hoot.  If I were to meet him somewhere outside of dentistry, I doubt I would guess that as his profession.  I know that there are several hoops to jump through just to get IN to dental school, then one must get THROUGH it.  The dentists I've known before, while friendly, have been rather serious types.

But our current dentist is Extrovert with capital "E", fast talking about nearly everything under the sun.  A little over a year ago, he was giving me a crown.  Just before he popped the thing into my head and sealed it there for all time eternal, he dropped it on the floor!  Utilizing the 5-second rule, he quickly plopped it into some sort of solution and affirmed, "Don't worry, this stuff kills everything known to man, I'm surprised it's even legal!", in his characteristically entertaining way.

I've never had troubles with that crown.  I guess there was nothing unknown to man on that procedure room floor.

I've gotten used to his goofiness and find it refreshing in a dentist, because he's also shown himself to be quite competent.  I just have to listen carefully since he talks so fast and so much.  Last summer, he was telling me about his reactions while watching the latest Batman movie and asking me about my shoes when, somewhere in the middle of all that, he recommended that Chaco get his wisdom teeth pulled very soon.

We didn't get around to the wisdom teeth extraction in time for the start of classes, so one of the "bucket list" items for winter break is to get 'er done .  This morning, Chaco and I spent about an hour at the oral and maxillofacial place doing consultation and consent stuff. 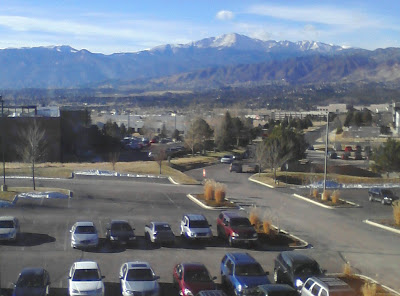 As is usual, a portion of that time was spent just waiting.  I decided the view out the window was nice so captured it here.


I suppose the mountains were pretty too, burn scar and all.


I've never had my wisdom teeth removed.  It seems to be nearly a rite of passage for the college-aged, but I'm keeping mine!  I need all the wisdom I can get.
.
Posted by Abby at 1:13 PM

My poor daughter looked like a freight train had hit her, she vomited in the elevator, and was loopy for the rest of the day. THEN the pain started. It's ROUGH.

I had my wisdom removed one tooth at a time. Ian got his removed in June. It was a bit shocking for him to have all that gunk in his mouth, blood, saliva and having to spit constantly, but he survived and was good to go in about 24 hours. Sheer will, I think.
I like the sound of your fast talking dentist.

Colorado is pretty! And I like your new vehicle, too!

As I've never had it done myself, I am worried about the whole anesthesia thing. They make it sound like such a routine thing, but still - I'm the MOM!

It's good to hear of some recent first hand accounts. A couple of Chaco's friends had theirs taken out. The goofy dentist warned him to try not to speak pornographically while under the influence (apparently that's quite common!)

"They" all wanted to take my wisdom teeth, too. Most were surprised to see I actually have them, expecting the extractions to have already taken place. "They might give you problems in the future; we recommend taking 'em out now..." Do you even know how old I am? No probs so far, and what's gonna change??
I think there's a mass collection of them somewhere. I just gotta figure out what "they" are doing with wisdom tooth stockpile.

Anyway, when it comes to wisdom teeth, the "wisodom" (and motive)of the dental industry is questionable. Unless Chaco's teeth are crowding, consider "If it ain't broke....."

I had all my wisdom teeth "dug" out at the same time when I was in high school. I remember being drugged and I vaguely remember a mouthful of gauze, but honestly I don't remember it being that painful or difficult to recover from. Maybe I just blocked it out of my mind. :/
Your dentist sounds a lot like ours. Talks quickly and constantly and I have to concentrate to keep up.
Guano makes a good point though. Are his wisdom teeth in already? If they're not crowding his other teeth, perhaps they can just stay....

I didn't have my wisdom teeth pulled until I was in my mid-30s. Just bopping along in life, not really worried about them when one day, one of them gets infected. After that, the other three joined in. Went to the oral surgeon and he recommended pulling them as this would probably be a recurring deal. He suggested doing "one at a time" and I kindly replied OHN - if I go under the knife for one, I want to go for it all. Did it on a Friday, spent the weekend recovering. Get some good pain killers and let Chaco chill for the weekend. Good luck and I hope it goes smoothly.

None of "them" have bothered with mine. Big mouth.
In Chaco's case, the x-rays show evidence of crowding and more to come. But now you've got me thinking all Dental Conspiracy! How do we know those are really HIS x-rays??

Yeah, well you're tough... or have a high tolerance to drugs??

Mid-30's late bloomer! This is why we wanted to wait for a long stretch of no classes, so he can just lay around and eat ice cream.

Maybe that's why I don't remember my surgery as being a big deal. Laying around and eating ice cream is an every day occurrence with me.

Your dentist's personality sounds much like my chiropractor's. I guess it makes these necessary and routine appointments a little more interesting.

You're fortunate that you haven't had to have your wisdom teeth removed. Everyone in this family had to have it done, "or else"... I guess we were all in danger of suffering oral deformities and complications and such. And every one of us ended up with chipmunk cheeks for a few days. I'm glad to have those experiences behind us!