I've lost something, and this is rather distressing.

I last remember wearing them last Friday when I went walking with China.  I've looked in all of the obvious places, including my head.  No earmuffs.

But I did NOT steal that Mickey Mouse hat.  If anything, I rescued the poor thing!

Either way, I am now earmuff-less.  But it's not a tragedy.  I'm putting things in perspective.  Others have lost much more. 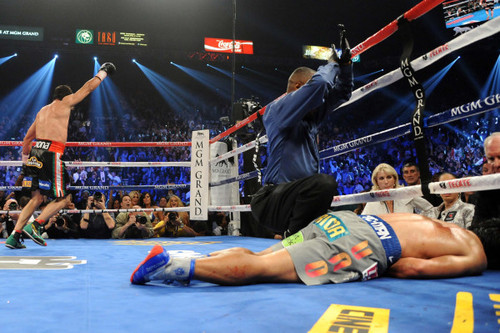 Anyone who even remotely follows the sport of boxing knows who Manny Pacquiao is.  My half Filipino heart half follows.

He lost over the weekend.  He punishingly lost consciousness.  He took a big nap on the canvas, and the image of his nap has been showing up everywhere ever since.  Oh look, here's another one...

Then there's Anne Hathaway who, I guess, lost her underpants.   Then she had a wardrobe malfunction (likely story) captured on camera.  I'm not putting that image on my blog.

Some lower profile losers from my small world have recently lost homework (mmm hmmm....), an iPhone, prescription glasses, a gold necklace, and one chihuahua.

I can live without earmuffs, I'm telling myself.  But June came by today wearing some awesome leopard skin patterned earmuffs, and now I have earmuff envy.

I can live without earmuffs, but I'd prefer not to.  Have you seen them??  I'm a sore loser.
.

But a colleague did just get a hat like the one you found, but in fake leopard fur...

I think you should ask Santa (within hearing of all, of course) for some new ear muffs...

So frustrating when that happens. How have you been coping since your loss? I think if I misplaced mine, even for a minute, I would be out buying more. They're a necessity for cold weather running.
(And I agree with you. You're providing that Mickey Mouse hat with a loving home.)

Good idea! Thanks for checking :)

Thank you for your concern. I'm taking it one day at a time. Maybe if I keep looking intensely at the peg where they sleep, they'll return to me.

"Earmuffs gone missing" is much more accurate than "turned up missing", which is a bit of an oxymoron. How does something turn up missing? Anyway, a vernacular kudo to you!
I have the perfect running headband and running gloves. Had 'em forever, don't know where I got 'em, nor have I seen anything similar anywhere. I keep 'em in a safe place, but my procliviy for misplacement is always looming...

I thought I saw them the other day when I was walking the dogs, but it was only a slow moving squirrel. I'll keep looking. Maybe they ran off because they were jealous of the new "other" hat. Did you check your coat pockets? That's usually where they like to hide out.

Wolfgang has a pair of perfect running gloves he got for free (running store propoganda). I've got glove envy, and HIS proclivity for misplacement has me worried.

Thanks for keeping your eyes peeled. I've checked the coat pockets, the poop bag bag, under the futon. All I've found is dust bunnies. Maybe the Subaru stowed them off to pasture.

That's why it's such a mystery!

Quite a list of characters here: Manny, Anne, Magnum, the hat representing Mickey Mouse, losers from your small world, the chihuahua - Where are those earmuffs, people!!!

Your earmuffs MIGHT be in my front closet. There are five bins in there containing various winter gear such as mittens, gloves, scarves, hats, ear bands, ear muffs... and yet, my daughter couldn't "find" a hat to wear out sledding the other night. (Well, really that was probably a case of her needing to be fashionable while hurtling down an icy hill on a sled.) Anyway, I'll have her check for earmuffs next time she's digging around in there.