We went Boxing Day shopping today.  Well, I didn't really shop.  I was just escorting people who were shopping, and I didn't buy a darn thing.  Maybe I just liked being out with all those other day-after shoppers.

As I was loitering shopping, I saw a few things I might like to have, but nothing really spoke to me.  But I'm not fully without desires.  There are a few things I wouldn't mind adding to my earthly treasures.

I think I might breakdown and finally get an iPod.  I don't own an mp3 player of any kind.  I got an iPod shuffle a few years ago.  Magnum got it for free - I forget how - and smartly gave it to me.  So I have an iTunes account and have playlists on the computer, but that's it.  Nothing portable.

The shuffle was a bust.  Ever have one?  All of the controls were incorporated into the earbuds.  If one sweats while wearing them, and the sweat gets into the controls, the controls go out the window.  I only used mine while sweating.  I enjoyed the songs until they were played at max volume and max volume only, with me being unable to do anything about it.  WHAT?

I wasn't the only one that happened to.  The shuffle and I parted ways.  I could make do without, I told myself.  I'd be the bhikkhuni  of mp3's.    ("bhikkhuni"  is a word I learned today. They're like female monks).   Apparently, I've grown tired of the nunnery.  I want an iPod.  One with controls that work. 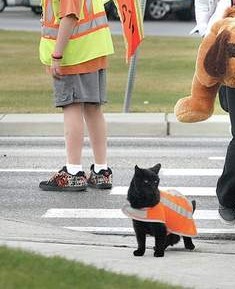 Also, by now, most everyone's heard of the Crossing Guard Cat, right?

The crossing guard cat is a riot.

A mp3 bhikkhuni? Are you really going for the shaved head look?
I made the jump to the iPod a few years back before my 1st half marathon. I never did like the shuffle - go for the iPod Nano instead. 1/3 the size & mass of the iPod and a lot more rugged (less moving parts to break). Good for road warriors like you (and SR300). That and you can fit a gazillion songs on it. Lace up the shooz, hit shuffle and off you go.

I've had my iPod for years and LOVE it!Sometimes I run "naked", but most times, on my lone runs, I have it along. Not loud - gotta hear the cars,etc - just enough to keep me from gettin' bored.
I've never run with it during a race though since all the activity and excitement keeps me from getting bored.
But, yeah - totally recommend you get one. Totally. :)
Am I working too much? I haven't heard of the crossing guard cat. Goin' to look him up now....

I never run with music, preferring the natural, cadenced solitude of the run itself. Music makes it "plastic" & artificial (to me, anyway...).
Nothing better on the motorcycle, though. Problem is that I'm not waay into music so I'm stuck with the same tunes, always hurting for something new. 80's rock only goes so far! Plus my iPod is so old, I think its vacuum tubes need replacing.
And agree Nano trumps Shuffle, hands down.

I'm thinking maybe he was an awesome crossing guard in a past life - maybe even died saving some kids! And his reward was to be reincarnated as a spoiled cat. Could happen??


A shaved head would save me some time in the mornings...

I totally got a nano! I'll probably use it pretty sparsely outside, but for the rare treadmill/stationary bike day - yes! I think I'll have a ceremonial burial of the ancient cassettes a little later. Yes, cassettes!?!


Oh, I shuffled right past the Shuffles!
I usually like the outdoor morning quietude for running too. Plus, I want to be able to hear the coyotes.

I love my ipod shuffle, but I haven't had an issues with it. I just re-sync it every so often and I'm good to go!

I like the iPod for treadmill running, but prefer no music when running outdoors. And I got a speakers/docking station thingy for listening to the iPod while putzing around the house. Love my iPod. You should get one.