It all began with the great art renaissance of 2009.

I had been an artsy geek kid from as soon as I could hold a crayon.  Somewhere after high school, though, she got stashed away into my inner attic.  Work and babies and "adulthood" took a front seat.

Then one day in 2009, I started feeling funny.  I found myself with a bit of free time, and maybe it was something that I ate.  I hurled all over a wall in the basement.  It wasn't dainty or tentative at all.


It didn't stop with the flower mess.  Sea creatures, palm trees, comets...  no wall was immune.  Even my kids were going all "WTF?" in not so many words.  I decided maybe I should get some canvases or something. 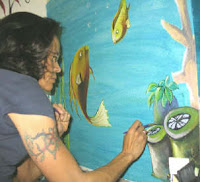 I suppose it was inevitable that some would spill on me.  Somewhere in all that drunken mess, I ended up with a tattoo.
But it's really not as "rebellious" as some may think.  Here in our neck of Colorado, we have about 3 seasons.  Fall, winter, and tattoo.  It's not just emo's and punks and sluts.  I know tattooed housewives, school teachers, college kids as well as tattoed emo's, punks, and sluts.

I didn't come up with mine on my own.  I found a tattoo artist who designed mine after chatting about it with him a bit.  I wanted "pretty", and he added a nice edgy wildness that I like.

I think it gives me street cred in the crosswalk.


The one thing that does cause me pause is when I meet a new student for the first time.  Will they not like having a tattooed tutor?  But that has yet to stop anyone.

I awoke one day to find I have a tattoo.  I'm sure I'm not the first to have that happen.  It splattered onto me during a party.  Or maybe it was always there and just emerged.
.
Posted by Abby at 12:13 PM

I happen to like it, and had totally meant to ask you about it while we were muddin', so thanks for sharing the story now.
It's probably good that I wasn't there during tattoo season. I've asked hubby how he would feel if I ever got one, and he's been pretty vocal about me not doing it. I don't feel strongly enough about it to push, so I don't. But if it was the season... I mighta had to.
Was your wall painted while I was there?

I wanted a tattoo for the longest time and I'm SO glad I didn't get one. I designed it myself, fell in love with it, but as the years passed I can't help but wonder "WTF was I thinking?"

A dragon holding a butterfly, on an old woman in a nursing home.....I wouldn't want to have to explain that. lol

Nice Tatt Abby, I always said I was going to get myself one, one of these days, that day has not made it as of yet, actually had a friend that was a tattoo artist and sat and watched him tattoo our boys, so I let that opportunity slip away.

Yours works for you and the basement walls are impressive, a student that would have second thoughts is missing out on a good tutor, tattooed or not.

What a wonderful blog post, Abby! Brave women have tatoos! :)

Really? Ever thought about what you'd get and where? I know a guy...
For Mr. Shadowrun, there's the alternative trick a la "Hmm, should I get a pretty tattoo on my upper arm or gauge up my ear piecings...?" (You're a mom, you know how it works)
Yep, walls still painted.

I've thought about that! Thirty or so years from now, there's gonna be some saggy tattoos in the old folks homes!

Thanks Jimmy. I'm surprised you didn't hop in the chair after watching!

Indigene! Nice to "see" you.

Nice tatt! Also, why does alcohol and art make me think of the local Drink and Draws we have at the bar here? xD

I love some meaningful ink. I have four tattoos. http://agentrusco.blogspot.com/2010/05/fox.html

My others are words in Icelandic.

For years I nearly got a tat, but it was one i wanted to remember stuff, that is best kept inside. Also I can't believe you're inner artsy geek is so talented. My inner art geek is at best stick figures.

Maybe I should suggest that our crossing guard (or lollipop lady, as we call them) should get a tattoo - maybe people would stop trying to kill her if she did...

How anyone would not be careful around someone with the title of "lollipop lady" is beyond me. I think I'll lobby for that title here in the U.S.

I know several people who have "nearly" gotten one. Then there are those that can't stop getting them.

I've admired your ink whenever it peeks out in your pics. I remember when you got it and always thought it looked great. Adds to your classy/tough bad a$$ crossing guard look. Nice to hear the back story on your motivation to get the tat. I'm another one of those nearly gotten one - always wanted one but just hasn't been in the right season.

I love your tattoo. Do you have the urge to get more tattoos? That seems to be the trend with my tattooed friends. Once you have one, they just keep coming.

I have always sort of wanted one, but since I can't even bring myself to get a tetanus shot, I can hardly see me sitting still for a whole tattooing.

I've seen some others who can't seem to stop getting new tattoos, with some bad results. That keeps me from going all "hodge podge".

Just to clarify, I don't plan to get in any bar fights, but if this helps to deter that, so be it!

Shadowrun, you're not 50 and rebellious yet, huh? :) Not that you have to be rebellious. Abby wasn't when she got hers - right Abby? lol

I don't want a tattoo, but I'm sure I've done some other things that Husband disapproves of. He's a nice guy though and
still professes his love for me. :)

ps. I know you're NOT 50. Both of you still have your girly looks.

I just read an article this morning about why it's fun to get older. One reason was that we could finally get a tattoo. Everyone always thinks it will look bad when you're older, but if you wait til your old to get one, it'll look fantastic! I'll be hittin' 50 soon enough - maybe that's what I'll ask for for my birthday! :)

I like that concept! Snazz up the old(ish) body with a fresh tattoo!

Good point. If our skin has already gotten a little saggy, then the tattoo shouldn't take too much of a dive during the second half of our lives. :)

Who knows, I might sneak a little one near my belly button or something. lol