The other day, I alluded to a new toy that we were anxiously anticipating.  Magnum had spent a gooder part of the weekend researching and analyzing in pure Asperger fashion to hone in on his final answer.  Then he ordered it.

Yesterday, I went out the front door and found this: 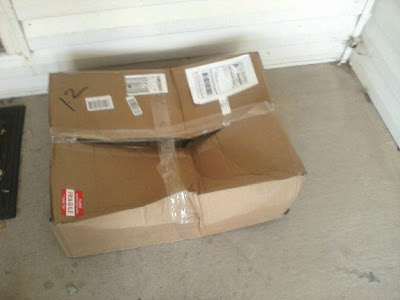 I thought the addition of the "FRAGILE" sticker a nice decoration.

I wasn't all that concerned.  The nature of the toy's purpose makes it quite sturdy.  There are some electronics involved, however, which caused a little unease at the state of the packaging.  But the box was (mostly) still closed and didn't rattle or anything when I picked it up.  I did notice that it was lighter than Kat, which really isn't saying much...

I brought it inside away from the elements without opening it.  We went to a Meego band concert and, afterwards, I had a tutor appointment.  When I got home from that, Magnum, again in pure Asperger preoccupation, began pointing out the various flaws in the thing.  Including:


Okay so maybe I focused mainly on the fact that it's used - not being as familiar with the expected end product as Magnum is.  But USED?  Reminds me of that time we bought a TV from the store that will NOT remain nameless, because it's SEARS and they sold us a used TV claiming it was new.  (Deciding to take advantage of the opportunity to dis them)

Thing is, getting something like that is kind of insulting, right?  Do they expect that we won't notice (it's pretty obvious)  and will just accept it?   It's like the TV incident all over again.  Although, I must say it was kind of fun bringing that TV back and watching the SEARS people squirm.

Magnum's now on a new mission to get them to make it right.  The wait continues.
.
Posted by Abby at 1:59 PM

Let the justice begin!
What a bummer! And SEARS? Shame on them!

Oh m'gosh, you're killing me! What is it already?

I'm glad you called Sears out. They shouldn't remain nameless - that's awful!
And your new gadget people are going to be quite sorry they chose Magnum to try to deceive... Can't wait to see how that turns out!

We bought a "new" breadmaker once. But it wasn't -- as given away by the dough still crammed in the little mixer thingy at the bottom of the pan. Crimony, did they think we wouldn't notice?!
But a used whatever-you-got (mind still in gutter....Can't....Get it...Out!)? That takes the cake!

I have a feeling Magnum will in fact have them make it right, there is no excuse for used products to be shipped out as new and the shipping company needs a knot jerked in their tail also.

I have a feeling Sears has done this more than once as we have had the same trouble with them in the past.

Yep, and Sears has been having troubles. I think it's Karma.

It's bothersome because I was really looking forward to testing the thing out. Patience all around!

Yep, SEARS. I used to kind of like SEARS, but then that incident and I'm not so keen on SEARS anymore. Warn your friends and neighbors about SEARS!

Oh, forgot to say how bad that packaging is. Maybe the missing components slipped out through the opening near the tape.

You have to wonder what the delivery person was thinking when they left that on your doorstep... As if you weren't going to notice that it's practically falling apart?