I'm thankful that our road trip across Nebraska was a goodie!

I know that when one thinks "fun destination point", The Cornhusker State doesn't immediately pop into mind, but we learned that there is a lot to be said for Nebraska!  About a year ago, a friend of mine touted its attributes, so this year we decided to check it out.

One drawback road trip-wise, however, as my friend put it, "There is nothing between here and Omaha".  I think Magnum took that as a personal challenge, and he found stuff!  He does things like that, that's why he was appointed "Official Road Trip Planner".

Our first stop was actually in Northeastern Colorado - the Wild Animal Sanctuary.  It's over 700 acres of sanctuary for lions, tigers, bears, (do NOT say "Oh my!", don't say it, DON'T!), wolves, and other wild animals that have been abused or otherwise can't survive on their own.

It was really a great facility.  Visitors follow a raised platform and get amazing views of the animals.  Apparently, being on ground level with them makes the animals agitated and defensive, but they don't feel threatened by humans walking overhead.  We were advised that, should we drop something from the walkway, we would not get it back.  Hats, cameras, etc. would just become "enrichment toys".

Eventually we made it into Nebraska and miles and miles (and miles and miles and...) of corn fields.  This was a sight for us mountain folk.  I will admit, however, that it didn't take long for the novelty to wear off.  Magnum came through again in finding the Harold Warp Pioneer Village.  It's "The largest private collection of Americana anywhere",   and I believe it!


<----Any guesses as to what these things are?  The answer is at the end of the post, for those who make it that far.

We spent all day at the Henry Doorly Zoo and Aquarium and still feel like we didn't see everything.  Anyone who enjoys a good zoo needs to go to this place!  Even our teenaged boys sung its praises.

In addition to the expertly maintained displays and habitats, there is a skytram and zoo train driven by an actual steam locomotive (neither of which we rode).


The hotel clerk in Lincoln told me it was the best zoo she's ever been to and I would echo that.  The only "drawback" is that it's just so HUGE and complete, that it's difficult to take in in one visit.

The Jungle exhibit alone is the largest indoor rainforest in THE WORLD.


So a great trip all around!  And did I mention the SAC and Space museum?

Throw in more corn fields, lots of hotel pool swims, endless rounds of 20 Questions, more educational stuff, and this was another road trip to remember.

If you need somewhere to "get away", I say NEBRASKA.  Who knew??

OH, and about the mystery question... those are "Calf Weaners", yes they are!  Here's one in action... 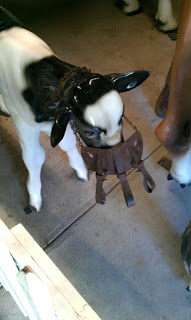 Now you too have seen a genuine calf weaner.
.

Good grief. A calf weaner. When will humans just back off and let mother nature do things the right way.

I can't believe you fit all of that in while you were gone! Magnum really IS the expert planner!
Cornfields do have a way of dragging on and on and on. I'm kinda dreading our LONG drive across Missouri and Kansas for that reason, but the mountains should prove to be worth it!
So glad you all enjoyed your trip! The pictures are awesome! Did the orangutan find her alpha male? Or were you able to come home with all of yours. :)

Yeah, they struck me as a bit sad.

I found her alpha, face down in the grass while she was checking out mine.

And just a word of warning: entering Colorado from the east is a bit anti-climactic. Eastern Colorado looks a lot like Kansas. But you'll get to the mountain views eventually, needing to resist the urge to go all Julie Andrews.

Thanks for the warning... I'll squelch my inner Julie Andrews as long as I can. :)

Kacey and I visited that zoo last year while in Nebraska for a national softball tournament. I will agree... best zoo ever! And we have a pretty good one here in MN.

So glad to hear you had such a good time. Those family trips will probably become less doable in the next few years with the kids getting older.

Dang. I was in Omaha only months ago, but working the entire 2 weeks. Was told about the SAC Museum, but it was so far off the beaten *ath I figured it would've been a bit of a dim bulb (and I dig that stuff(. Now I regret *assing that exit!
And a zoo! Who knew> The locals did, however, rave about the Joslyn Art Museum -- you (of all *eo*le( just might have to go back!
I like the way you *ick your road tri*s -- avant garde!

Glad you had a great trip--Nebraska sure would be a nice place to be this coming week!

I've been to my fair share of military aircraft museums, and the NE one was top-notch. I'm sure they'd be happy to see you!

Never heard of the Joslyn Art Museum until now and just googled it. I may have to have a little discussion with the Official Road Trip Planner.

Glad you clarified the calf weaner thing. I figured you guys had wander off into the "exotic" wing of Nebraska folklore.

Love how Magnum was able to dig up the interesting sites to visit along the way. There are lots to see everywhere you go, if you dig deep enough. I definitely would have made the road trip to the Pioneer Village and the SAC museum. Sounds like a nice family road trip and, who knows? the younguns might have learned something.