Apparently one of our goldfish was a bit gassy.  She was having "buoyancy issues".  Ever try swimming while hugging a beachball?  That's what our fish was imitating, to the point where she would totally flip over and float upside down when she tired of fighting it. 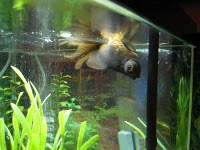 Note:  I have no idea whether or not this fish is male or female, but we named "her" Lillie, thus the female pronoun...
Now, none of us had ever seen such a thing and I just figured she had one fin in the toilet, but she just kept on going - for days and days.  Finally, Dr. Wolfgang did a google search and found this to be a common thing with fancy goldfish.  That's probably part of our problem, in the past we've only had unfancy fish.

Anyways, about 3 minutes of research and he learned we should feed her peas.  What? What??  Feed peas to the goldfish?  Yeah, okay whatever.

And heck if it didn't work.

She was right side up in a few minutes and bottom feeding like the best of 'em.  A few peas in her general direction was all it took to cure the fish farts - or lack thereof.

Is there such a remedy for the dog?  OTHER  family members?
.

Who knew that peas would solve Goldfish farts? Amazing what you can discover through the marvel of google. Iwould be interested to know if they work on the dog.

Glad she's okay! I had a tarantula named Charlotte for many years. And about once a year she would appear dead, but she was just shedding her exoskeleton (as a snake sheds its skin). It was always unnerving for me, though--not knowing for sure!

Actually, it will remind them of the fact that they "don't" have any fish pets and then they'll beg for some.

ps. What would we do without Google? A few years back, we'd be thumbing through Encyclopedia Britannica (my husband has a set) trying to help poor Lillie. Glad she's back to normal.

That is AMAZING! Don't ya just love Google?

Kacey was begging for a fish all summer. Kinda makes me wish I'd let her have one. We coulda been learning new things every day too!