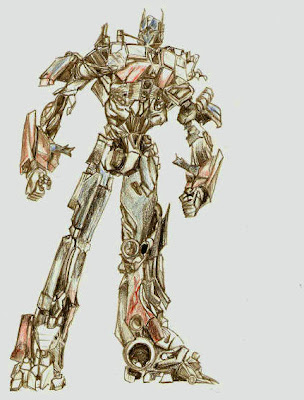 Welcome to another installment of Illustration Friday on Saturday!
One thing I really like about this Illustration Friday business is that it often gets me to do things that I wouldn't just choose to do on my own. When I saw that this week's prompt was "toy", nothing came to mind right away.
I sat here pondering and then bounced it off Wolfgang who was here in the room with me. "Hmm... what should I draw for 'toy'?"
I half expected him to join me in my puzzlement, at least for a while. Instead, however, seemingly without even taking a breath, he answered, "Optimus Prime". Yes, he's quite a fan of the whole Transformers conglomeration and has done his part to contribute to Michael Bay's bank account. Recall that he has his own Optimus Prime rendition, prestigously placed on our own Wall O' Muscle.
Anyways, Optimus Prime? Well, I wouldn't just sit down and decide to make a drawing of Optimus Prime, but why the heck not? And so I began. 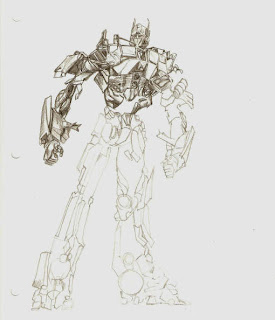 I got to know good old Optimus more than I ever thought I would. He's certainly not one to be messed with.

I spent a gooder part of the day with Optimus, in fact. In the end, it was all quite fun. 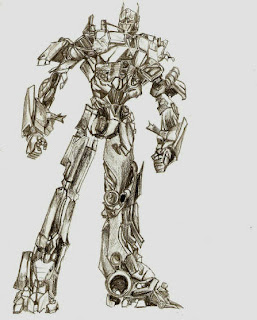 And that's what toys are for, right?

My first thought was, "How long did that take!?!"

Then you told me, "a gooder part of the day."

Awesome!...You got something there ... Transformer fans might want to bid on it. :)

Love the detail. Sharp lines, good color. I think it rivals some graphic artists who draw those series. I can see where it took a gooder part.

And it shows how much toys have changed! Imagine the reaction if you could send that toy back to this date in 1911, or even 1961!

You did a great job of illustrating what an imposing character he really is! I am only familiar with him via my god son's fascination with him, so I've done my share of observing the Transformers cast in the toy department.

I guess I'm too much of a dinosaur to even know of Optimus Prime, but you did a great job with it. I really like the half done drawing. Makes it look like he is transforming :)

This is a damn good drawing. There's a lot of detail going on in there.
Boys have cooler toys than girls... no fair!

This is a hard thing to draw! Great job!

You are the coolest mum ever!