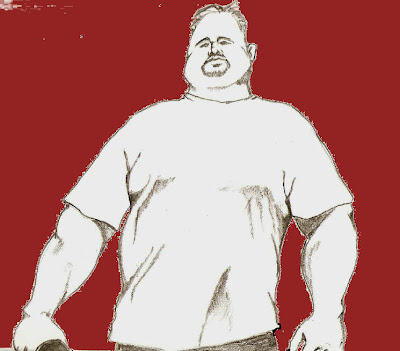 When I saw that prompt, I was reminded of my working girl days. My department had an annual summer picnic. No spouses. No kids. Just us working slobs getting together for an afternoon of fun, beer, and camaraderie. I truly believe that this simple yearly event was a major factor accounting for our excellent synergy at work, despite many differences in ages, personalities, and backgrounds.

And I recall one year where an impromptu Tug-of-War tournament broke out. For some reason there was a rope laying around and we decided to pick teams ala the old playground style of gathering some "captains" and letting them pick from the underlings. I don't remember, but I was undoubtedly one of the last picked - unless a team took pity on me.

Anyways, I recall one team in particular - the winning team - the team that blew all other teams away. It consisted of just 3 guys, but they were the 3 largest guys in the department, looking much like my depiction above. All other teams had 4 to 6 members, but none were a match for the uber tug-of-war team.

In fact, it was so humiliating, I recall vividly how this team didn't even dig their heels in as is customary in such an athletic competition. Someone would say "GO!", and these three would just move their hands from front to rear while holding their end of the rope, and the opposing team members would barely escape falling on their faces. Actually, some didn't escape.

That could've been from the beer, though.
.

This is great. I love the perspective, he looks massive!

THis made e smile--both your story and this wonderful picture. What a funny kind of claim to glory.